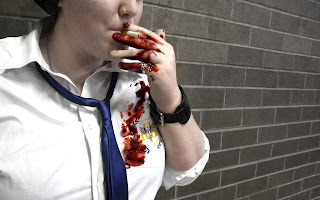 Imagine being at school and suddenly hearing guns being fired and people screaming and running for their lives. In Impact Theatre's and now we wait., we follow five teenagers who must hide in an abandoned theatre as they try to escape a high school shooting. Fortunately it’s not a scenario that Australia has ever faced, however writer Stephanie Clark, hopes that what will resonate with the audience will be on a wider scale.

"The event that underpins and now we wait. happens all over the world in various forms every day. It is not always gun-violence. It is not always in schools. But it is always prevalent. Australia isn’t immune from that, and that is why I wanted to write this", she explains. "The Lindt Café Sydney siege is so exemplary of this. And then there is the far too common occurrence of family violence, sexual violence and violence against women."


"The characters in and now we wait. struggle to believe that something like this could happen somewhere so peaceful, quiet and protected. It’s always hard to believe the horrors that happen close to home,” she says. “As Britt states in the show, “this doesn’t happen here. This sort of thing only happens in America.” For some people, however, this is their everyday reality; and that this could happen to any one of us, at any time, and at any place. Even in a place like Australia."

Formed in Gippsland in 2012, Impact Theatre’s member’s age bracket is 14-25 years old with the average age of and now we wait.'s cast and crew being 19-20 years. "We first came about as a direct result of passionate teenagers who were looking for a place to perform at a more serious level: not just pantos and musicals. We were looking for an outlet where our voices would be heard not only as young people but as artists who wanted to make powerful theatre that told stories, our stories," Clark tells me.

The sentiments are shared by the director of and now we wait., Julia Lambert. “I hope audiences walk away with an understanding of how brave and resilient young people are and that we need to nurture that. I hope that this comes through in the script with the strong performances of the amazing young cast, some of whom are first and second time performers and through the realness of the characters portrayed on stage.”

Having had a successful pilot season across Gippsland and at Abbotsford Convent, Impact Theatre decided to debut their show at Melbourne Fringe. "Mostly we're excited but I would be lying if I told you that we weren’t nervous and a little bit terrified. It’s a big step for us as a company and individually," Clark says. "We’re a very small company and very young in every sense of the word but we have a lot to say and a lot to give to Fringe.  We are so passionate about this show and about all the work that we have put into it, and we are just super excited to share it with the public."