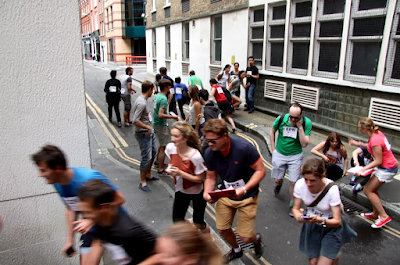 Earlier in the year, I wrote about my experiences at the Melbourne International Festival of Games, which you can read about here. For the Melbourne Fringe festival, Pop Up Playground is returning with one of the most enjoyable games I have ever played, the immensely fun and exciting Citydash. Created by Fire Hazard, Citydash is a high-energy game of speed, stealth, and strategy, played in throughout the city streets.

"We've been friends with the Fire Hazard crew in the UK for a couple of years and we invited them out for festival this year because they offer a kind of game that Melbourne hasn't seen much of really," explains the company's Constructive Communities Director, Sayraphim Lothian. "Digitally supported street gaming is popular in places like London and New York but its only just starting to emerge here.  When the opportunity arose to keep running it here for them, we jumped at the chance."

A series of cryptic clues pop up on the Citydash mobile app and teams compete to solve them, navigate to the location and spot the checkpoint to claim the points. The twist is that the area is patrolled, and teams lose points if the guards spot them. Players need to work together to maintain a lookout, making stealth and alertness more important than speed.

"People love this game. They like the physical exercise, the chase and most of all the way solving the clues makes you feel smart," she laughs. "When we originally ran it there was a lot of keen feedback that we should run it as part of Melbourne Fringe, and the festival gives it good exposure to a wider audience. The more people who come play it, the more fun it can be!”

The two times I have played this game has been at Birrarung Marr, but during the festival, the game will rotate venues: one day at the Fringe Hub in North Melbourne, one at Birrarung Marr and one day at the Library at The Docklands. "It's so much fun. It's a great social activity. It's a great way to get exercise but it doesn't feel like exercise.  You never get to see the city this way...take your pick," says Lothian when asked on what draws people to the game. So make yourself a team (personally speaking I find groups of 3-4 work best), and start working on your plan of attack!