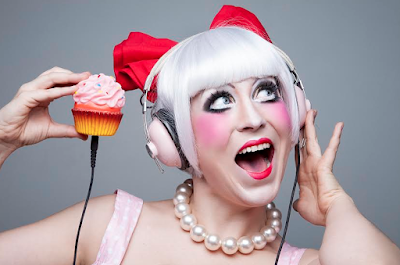 Whimsy: to be playfully quaint or fanciful behaviour or humour, which is exactly what you get with The Merchant of Whimsy, a playful celebration of the different and strange that lives within us all. Clara Cupcakes utilises every skill at her disposal with acts ranging from mind boggling hula hooping to stop motion animation filled with whimsy and wonder, all tied together with her cute yet surprisingly dark and insightful character.

The brains and talent behind Clara Cupcakes, Elly Squire, burst on to the burlesque scene six years ago and hasn’t looked back. After performing in Fringe World in 2012, she packed her bags and travelled the world, performing everywhere and anywhere she could, in as many different disciplines as possible. All these experiences culminated in the debut season of The Merchant of Whimsy at the Melbourne International Comedy Festival, which rightfully earned her a 2015 Golden Gibbo nomination.

"After I found out I was nominated, I had to go home because I was so over simulated and I just paced around the park next to my house, wrapped in a blanket, talking on the phone to my best friend in Perth because I didn't know what to do," Squire says. "I alternated between laughing like a maniac and sobbing uncontrollably. It was my first solo show so being nominated for it was kinda amazing. I was nominated with some of my very favourite people, which was the best! I also got so many hugs all the time. I think that was my favourite part."

So who exactly is this Merchant of Venice? "She is Edmond Dantes. She is your father and your mother; your brother, your friend. She is you, and me. She is all of us. She is also someone who grossly misappropriates lines from the movie adaption of the excellent graphic novel V for Vendetta to inaccurately describe herself," she says. "The Merchant of Whimsy is actually Clara Cupcakes, alter ego, well known rabble rouser and totally loveable loon. Her primary function is to be a big weird idiot who does strange things and has the best time ever in the hopes that it'll make people laugh. Please laugh."

"I hope the show makes people feel uplifted, like happy little helium balloons. I want to feel loved, okay with the world and to accept and love people for who they are - quirks and all. Most importantly, I want them to feel like it's okay to be silly sometimes. It's FUN!" Squire explains. However, if that isn't enough to sway you, there is much more to see in this show. "It has 6 costume changes! And light sabres! And circus! And monkeys! No other show has monkeys. Well there is one other show with gorillas but that's COMPLETELY different." Whim lyfe indeed!