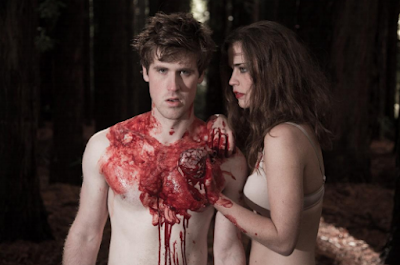 As a theatre critic, one of the things I always look for is how comfortable the actors appear on stage in their character as well as in their interactions with the other actors. Furthermore, the set and costumes are always indicative of how much effort and thought has gone into a show. However, with Melbourne Fringe show His Ghostly Heart, this is all going out the window as the show is performed entirely in the dark. Pitch black darkness.

"Performing in the dark is challenging, but it simply heightens the focus you need to have to connect with your other actor through touch, smell and hearing. It is actually quite liberating," says performer Riley Nottingham. "This is definitely a show that requires the audience to engage and it will challenge them. There are a lot of issues explored in the play and some audience members will want to see it a second time."


The one act play from the writer of the TV series Skins, Ben Schiffer, looks at a young couple in their bedroom, exploring the intricacies and intimacies of love. "The story is so real, so relatable and so honest.  Both (fellow performer) Bundy Marston and I have done more film and television work than theatre, but when we read this script it was so moving and powerful we knew we had to do it," Nottingham explains. "For us it reads much more like a slice of life, and as it's one continuous scene played out in real time it is much more filmic in that way, even though it's in the dark."

"This play is all about the connection, motivations and relationship between the two central characters," he says. "Richard Edge (director), Bundy and myself are hoping this performance will move people enough to revisit relationships in their lives, both past and present, and evaluate what kind of person they are, and how they're treating their partner.”