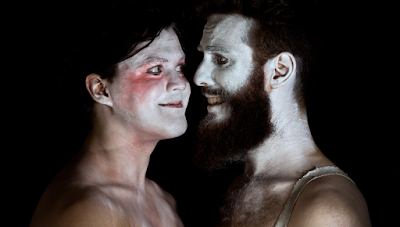 Andrew Milne and Patch Blank have brought their unique clowning and performance art production I Don’t Like You to audiences as part of the 2015 Melbourne Fringe Festival. Their debut show initially explores the relationship and emotions between two friends who actually don’t really like each other.

I Don’t Like You starts off strongly and with a seemingly clear aim of where it is headed. The duo are very skilled at finding humour in a range of situations and reminded me a little of the physical comedy popularised by Mr. Bean with their highly expressive faces and exaggerated movements. Milne and Blank play well together and their best work is when they are interacting with each other.


In the second act, the two begin to experiment with concepts postmodernism and to break down the structures they have set up. The silliness and jokiness and silence they were playing with become fragmented, and the audience becomes slightly more actively involved in the show while also unaware of what is going to happen next. At one point, Milne begins to aggressively speak to the audience as he emphatically blows up some balloons animals exclaiming "it's only air".

As part of I Don’t Like You’s "deconstruction" of theatre, Milne hangs a gun on the wall early in the show, a cheeky nod to the principle of Chekhov's Gun (which states, "If in the first act you have hung a pistol on the wall, then in the following one it should be fired. Otherwise don't put it there"). What happens with this production is that events in the first half are deliberately forgotten and others suddenly occur or appear in the second half. Increasingly, the show’s title seems to not simply be referring to the relationship of two people on stage but to be a critique of theatre and performance itself as the artists attempt to re-create what these terms actually mean.

Milne and Blank certainly have a knack with physical comedy, clowning and (meta)theatre. There are some clever and funny moments in I Don’t Like You and as first-time performers it will be interesting to see how they continue to expand on their interest of breaking theatre and its rules.

* Original review appeared on Theatre Press on 26 September
Posted by Myron My at 19:03