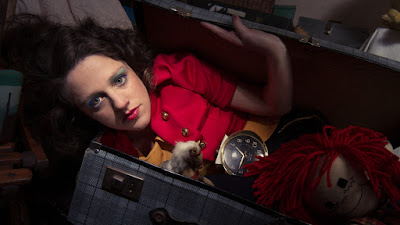 It can be pretty overwhelming to decide what to see during the 2015 Melbourne Fringe Festival, especially when you have over 400 events to choose from! In order to ease the burden and guide you in the right direction, I'll be chatting to a few performers who I think are going to be providing something unique or special to this year's festival, starting with Andi Snelling and her solo debut show, #DearDiary.

Snelling has kept a diary since she was 9 years old and to put it in a more concrete term, she has had over 5,000 pages of entries to read through to get #DearDiary to where it is now. "I’m not sure how many other shows in the Fringe have been written over a 24 year period without knowing they were a show, but mine is certainly one of them!" She says. "All the entries in the show are verbatim and so I’m exposing a lot of embarrassing, hilarious, tender and completely twisted parts of myself."

I find it interesting that someone would choose to reveal so much of themselves in their first ever solo show. So, was it an easy decision to make? "In February, I sat down and read my entire life collection of diaries for the first time and nearly knocked myself out with all the history. It made me see myself differently. So, it wasn’t really a choice to do something personal, it was just what I wanted to do. Certainly, there have been moments where I’ve thought, “Actually no, I can’t put that in. That’s too personal. That’s mine and I can’t put that on stage.” But overall, I get pretty damn naked in this show."

When many of us have trouble remembering what we did a week earlier, I imagine it was quite an eye opener to go through decade old memories. "What has surprised me the most is the fact that I already knew so much as a child. When I read my diary entries from when I was 9 and put them alongside my entries from when I was 29, it is striking how little changes, in terms of my wants and dreams," Snelling explains. "So my biggest discovery has been, as human beings, we pretty much already knew everything we need to know when we were kids and this is in the show."

The trip down memory lane however starts before Snelling's show even begins. A week before opening night, she will be hiding 24 beautifully handcrafted diaries inside the venue she will be performing at - the ever amazing Butterfly Club - and throughout the CBD for people to discover. "I want to encourage people to write whatever they want in these diaries, so that in their future, they too can step back into their past. It’s pretty powerful being able to step directly back into your own past," she says.

"I started writing #DearDiary as a 9 year-old back in 1992 and I’ve been writing it ever since. I would also say that because of the uncensored, unflinching honesty in the show, a lot of the audience will secretly identify with many parts of it. Voyeurs welcome!" And those are her final words on the matter. Book your tickets now folks.