Perhaps There Is Hope Yet… review - Melbourne Fringe 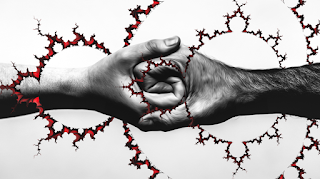 Having recently seen Rockie Stone perform in Finucane and Smith's Glory Box and being blown away by her sets, I was very much looking forward to seeing her in Melbourne Fringe show, Perhaps There Is Hope Yet, and it did not disappoint. Along with fellow circus performer Vincent van Berkel and with music by Sam Keevers, it is a wonderfully constructed show that is inspired by climate change and the slow disintegration of our environment.

The stage is littered with a number of glass bottles, a makeshift seesaw and a kinetic sculpture by Callan Morgan that while only acknowledged a few times, has a strong visual presence throughout the show. Initially reminding me of a traditional windmill and later, due to its movements, that of a wind turbine, it keeps the idea of retaining a sustainable environment for the future churning.

Meanwhile, Stone and van Berkel’s adagio routine is simply breathtaking and some of the formations created not only show the strength they possess but also the sheer amount of trust they have with each other. There is no fear or hesitations in anything they do. Similarly van Berkel's balance crane routine is just as engaging to watch. His movements are smooth and fluid and there is a sense of calm to his act. While this is happening, Stone is side of stage, dancing erratically to her Walkman and at one point moving into the audience; a contrast of scenes, mood and environment.

Perhaps There is Hope Yet is a meticulously thought out show and there is no step and no movement that does not have a reason or purpose for existing. The finale is a definite showstopper and there were minimal movements and breathing from the audience in fear of creating a butterfly effect that could spell disaster for Stone.

Stone and van Berkel know how to put on a show and Perhaps There is Hope Yet is a prime example of what circus should be. There are no gimmicks or anything to hide behind. Stone and van Berkel not only keep themselves exposed to our scrutiny but also expose the cracks in our environment. A show that needs to be seen.

* Original review appeared on Theatre Press on 20 September
Posted by Myron My at 14:18