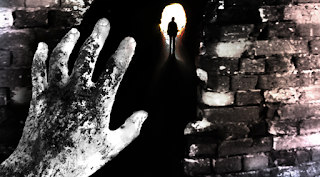 We are now living in a dystopian world of the named and the unnamed. Where safety and comfort are a thing of the past and children are now brought up in a society where the only games they remember are guessing how many bombs are going to go off in the night. Adam J.A. Cass' Fractured, explores this frightening world through five "broken" souls.

Danelle Wynne is the standout of the cast as Astrid, the almost feral child who is too afraid and suspicious of anyone to let her guard down. Her animal like qualities and habits show how deeply she has been affected by her experiences and are a strong contrast to the rest of the people around her, such as Suzi Loo played by Nicole Morgan. Morgan is also strong in her character and her concluding scenes were completely and utterly engrossing. Rounding out the great cast were Natalie-Lynne Pillar, Josh Vasilev and Amy Firth.


I particularly enjoyed the lighting design with this show and the shadows that were inadvertently created within the space. The scene of Rhodes (Firth) dragging in the screaming Astrid by the hair was particularly effective in this and thus bringing a sense of unease early on in the show.

Peta Hanrahan's direction gives the actors (and their characters) plenty of opportunity to move and express themselves whilst not being too overwhelming to each other and the audience. Considering Cass wrote this work specifically for the space at Club Voltaire, the space is perfectly utilised and the stage design, while minimal, captures the overall mood of the show well.

However, there are a few scenes that confused me as to their purpose, especially in its attempts to be - as mentioned in the synopsis - immersive theatre. At one stage, members of the audience are handed sleeping pills only to have no real reason for this to occur and nor is it elaborated on or discussed again.

Fractured explores the idea of having the courage to go on but also the need for compassion and humanity for the people we don't know but still need to care for and protect. The strongest, most effective moment of the show for me, happened before the show even started and when you go to see it (as you should), you will understand what I am referring to. What endures then, is a profound sense of responsibility we have to fellow humans who are less fortunate than us purely because of luck.

* Original review appeared on Theatre Press on 18 September
Posted by Myron My at 19:33