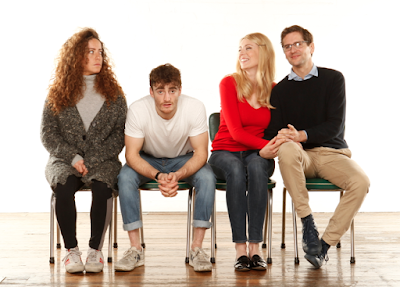 Already a hit on Broadway and the West End, Joshua Harmon's Bad Jews has crossed continents for its Australian premiere. The “bad Jews” here are three family members, siblings Jonah and Liam, and their cousin Diana (who prefers to be called by her Hebrew name Daphna) who have come together for the funeral of their grandfather. Over the course of the evening, their relationships, cultural identity, class and life are all explored, often with hilarious results.

Daphna (Maria Angelico) is not concerned with any form of financial gain from her late grandfather, and all she requests from her cousins (Simon Corfield and Matt Whitty) is her grandfather's “chai”, a gold ring that represents his soul, that he had since he was a child. While this "simple" request soon creates much tension for the three, it creates an equal amount of laughs for us.


Director Gary Abrahams’ exhaustive casting search has more than paid off with the actors he has chosen. Angelico is definitely a find as Daphna, who despite playing a character that can be abrupt and hostile towards anyone "different", still manages to show the vulnerability that is hiding under Daphna’s strong cultural and religious ideals. However, Simon Corfield as the arrogant and self entitled Liam, who remains the star of Bad Jews. The antithesis of Daphna, he is not a follower of the faith and nor does he have a strong connection to family that his cousin does. Corfield does a phenomenal job with his portrayal that I actually hated seeing him on stage and really wished he would shut his mouth every time he spoke. Everything about Liam; the way he speaks, the way he stands, the way he moves, is all powerfully convincing of a privileged, upper class white man.

Anna Burgess as Liam's girlfriend, Melody, brings an innocence to the show and some brilliant comic relief, with one memorable scene in particular being a highlight of Bad Jews. It's perhaps because of these three strong characters that Whitty's Jonah left little impression on me as scenes involving him usually had him doing nothing more than standing around with an exasperated look on his face. I've seen Whitty act before and he is a good actor but unfortunately the character needed to have a stronger presence if he was going to compete against the likes of Daphna, Liam and Melody.

Despite the one act play taking place entirely in a studio apartment, Abrahams ensures that the pacing never drags or falters. His use of the space and a mixture of verbal as well as physical comedy ensures our attention is always on the stage.

Ultimately, none of these people are actually very nice people and we are left wondering who exactly is the "bad" Jew and who is the rightful heir to the "chai". Even with a few "rants" that went on for too long, Harmon's script is a clever and well-observed character study on what makes us, us, and along with the talented group of actors on board, it is a show that makes for an entertaining night out.