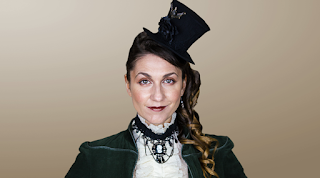 Rama Nicholas returns to Melbourne Fringe in fighting spirit with Mary Weather's Monsters. Set in 1890 in London, we are introduced to monster hunter, Lord Protector of London, Mary Weather. She has caught every single monster known to man; giant spiders, werewolves and swamp monsters to name but a few. However, she now she faces her greatest challenge yet, a challenge that will have her questioning her beliefs of what is a good and what is evil.

Nicholas plays all 11 characters in the show and her instant transformation from one to the other is testament to her consummate skill. Each person/monster in her story has a distinct voice and appearance and not once does she waver from her dedication to each character.

There are not many performers I've seen who can convincingly transport their audience to another world without a single prop or stage piece. Nicholas has only her talent of storytelling at her disposal and she does not disappoint. The story is told in a very cheeky manner and Nicholas knows when to gloss over things and when to go into greater detail. Subsequently, the audience never quite knows what is going to happen next but there is enough trust to know that she is going to give us a very good time.

Mary Weather's Monsters can be seen as an allegory for acceptance and standing up for those who are not able to do so themselves. It's about being true to yourself and challenging something when you are not convinced by it. Alternatively, it can also be seen as a fun homage to the monster genre and a damn funny show. Either way, you won't be leaving the show disappointed.

Nicholas' character work is masterful and her ability to tell a concise, intriguing and enjoyable story, will ensure that the shows she creates will always be a winner. Despite it being early days into the Fringe festival, if Mary Weather's Monsters is not on your must see list, then you're just doing Fringe wrong.

* Original review appeared on Theatre Press on 21 September
Posted by Myron My at 09:47