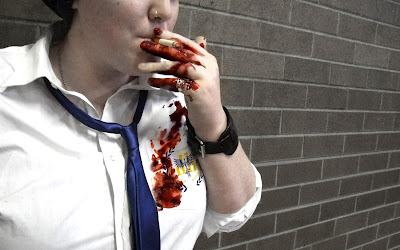 Playing at the 2015 Melbourne Fringe Festival, Stephanie Clark's and now we wait. plays out like a grim re-imagining of The Breakfast Club for, in this case, there is a shooter loose in the school and the five teenagers find shelter in an unused theatre. While they nervously remain hidden not knowing where the shooter is and waiting for the nightmare to end, the group gradually faces some truths about themselves and what is ultimately important to them.

Based in Warragul, Impact Theatre is an enterprising company that focuses on young people writing and creating original theatre productions. The cast ranges from 18-21 years of age, is a combination of first-time and regular performers with the company. While the difference in skill levels and ability to play more nuanced characters between them is evident, the entire cast (Emily Legg, Sarah Hartnell, Kyle Wright, Daniel Warenycia and Clark herself) remains dedicated to their characters and the situation they find themselves in. However, Hartnell as uptight smart girl Emily, and Wright as the jokester Nick, provide the most convincing performances of the night.

With her writing, Clark ensures the dialogue remains authentic and is delivered in a way you would expect real teenagers to speak. The flashbacks to what the students were doing before the gun shots are heard are well thought-out and the lighting and sound effects used in these moments is cleverly executed. There are however, times when dialogue and actions in and now we wait. seem rather forced and there are also a few discrepancies with the story. The cutaways to the three news reports could easily be omitted for more dramatic effect, to allow the audience to be just as much in the dark about the situation as the characters and to stay fully enclosed in their world.

Julia Lambert's direction artfully increases the panic and fear that is slowly seeping into the teenagers and she creates some great visuals in how the dual scenes are played out. The open incorporation of outside influences into the show is a nice touch, including one moment in particular, where as one latecomer to the show opened the door to the venue, the entire cast froze in terror as if it were the gunman coming in.

and now we wait. is a great opportunity to support and see an enjoyable show by a group of dedicated and promising young actors and writers. The subject matter is convincingly explored and there are some chilling moments throughout the show that will remain with you long after the climatic ending.

* Original review appeared on Theatre Press on 26 September
Posted by Myron My at 19:18