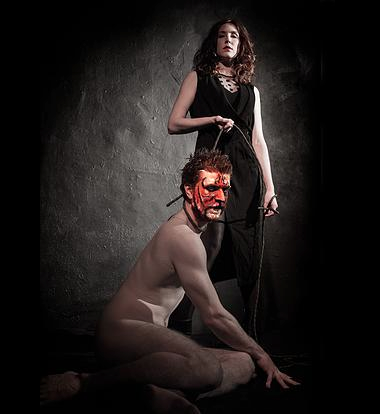 The Owl and the Pussycat returns for its 2015 season with the Australian premiere of Flesh Eating Tiger, written by Amy Tofte. I’m not going to beat about the bush with this one, I was sorely disappointed by this production and it is not at all what I have come to expect from this theatre venue.

My biggest issue lies with the script. When looking at individual scenes, it can be funny and sharp, but as an overall story it is just one big mess. Flesh Eating Tiger follows the relationship between two people, “A Woman” and “Some Drunk” and the destructive nature of obsession and love. However, before we can even get to know who these people are, the narrative is going off in so many frenetic directions that I could not keep up, and halfway through I frankly stopped caring enough about these people to even try.

The story is incredibly convoluted, which is surprising given how the scenes just seem to repeat themselves throughout the duration of the play. It almost reached the point where if  “A Woman” cried one more time or “Some Drunk” got angry and shouted, I probably would have done the same thing. 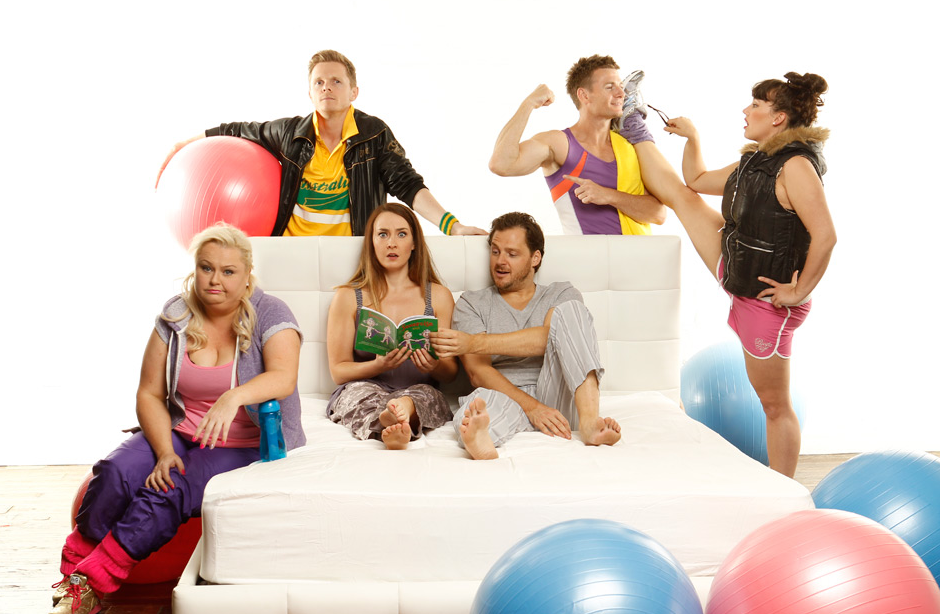 Who ever said that sex and exercise have to be mutually exclusive? This is definitely not the case with the new musical comedy directed by Sara Grenfell and presented by Aleksandar Vass and Malcolm C. Cooke, Sexercise, where we follow a married couple’s journey to rediscovering the fun and sexy times in their relationship.

The strength and success of Sexercise lies very much with its talented group of actors. Despite two solid hours of acting, singing and dancing, the small cast all manage to keep their energy levels up and the further we progress with the story the more this dynamism is visible. Clearly there is much fun to be had on stage, with the audience and with each other.

The Unspoken Word Is 'Joe' review 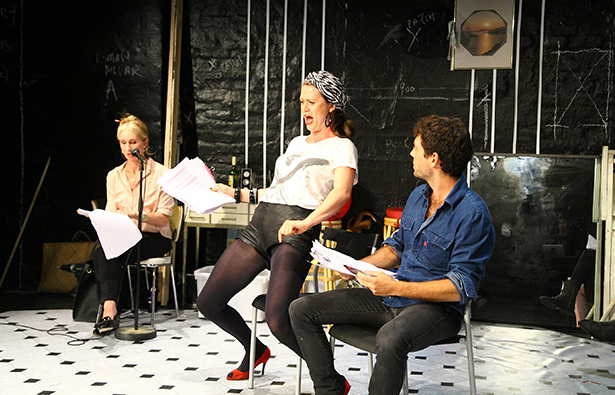 Remounted by MKA Theatre, The Unspoken Word Is ‘Joe’ is a play about a play about a play. I think. Things get confusing very early on. But ultimately it’s what happens when actors no longer have a script with which to protect themselves and must face life, real life. It’s about what you do when the shit really hits the fan and find yourself losing control for the sake of your art.

I will admit it took me a while to realize that this was not an actual staged reading, such was the convincing nature of the cast, especially Natasha Herbert as the “straight” stage director. She manages to steal every scene she is in and even some of the ones she isn’t in. Fortunately, once the off-script action starts, Herbert is cleverly placed in the background so focus remains on the four actors. 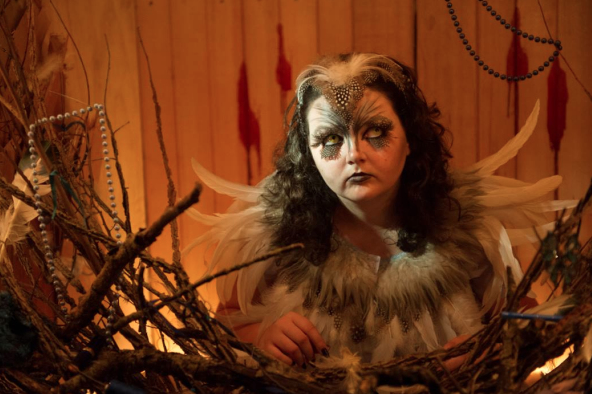 Barking Spider Visual Theatre has consistently created shows and performances that have a lingering effect on their audiences. Collaborating with MUST (Monash Uni Student Theatre), their newest production Psychopomp & Seething delivers on this reputation yet again. In two short pieces, they transport the audience to two very different dream-like worlds that are paradoxically calming yet unsettling.

The audience seating area has been specifically designed for this show and only seats twenty people in its very intimate structure. As we take our seats, the doors close in on the stage, boxing us in, and we begin to move. Yes, the seating bank moves. With nothing but a blue spotlight sporadically shining above us, I get images of the boat ride in Willy Wonka and the Chocolate Factory and the hurricane from The Wizard of Oz, which is fitting as this is the type of intriguing experience I’ve come to expect from Barking Spider.

From Whore to Eternity review 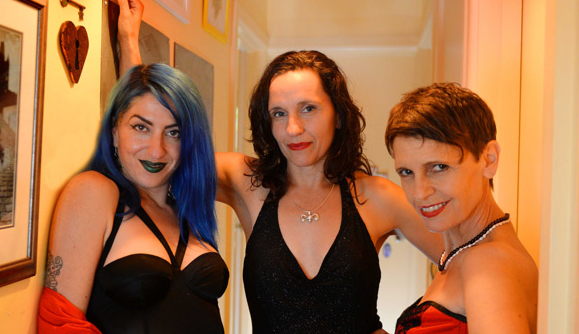 Sex worker. Call girl. Prostitute. Hooker. Lady of the night. In From Whore to Eternity, tribute is paid to these women and the cultural effect they’ve had, through various films, songs and stories.

Ruth Katerelos and Heidi Weatherald play two sex workers who inform us and sing about “historical” women such as (Sweet) Charity, Mary Magdalene and Fantine, and how sex played a role in their lives.

The inherent problem with From Whore To Eternity is the writing. It would seem Cerise de Gelder is unable to find a balance between informing the audience and entertaining the audience. As such, we were bombarded with a number of scenes that were disjointed and clunky and struggled to retain our interest. 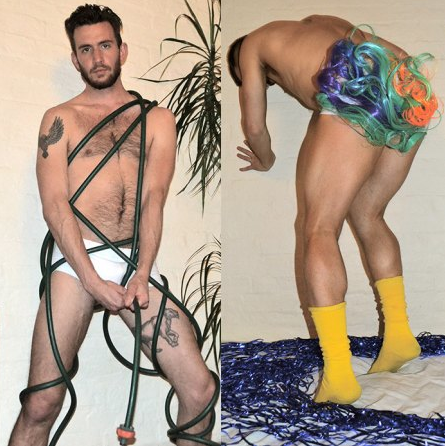 On the surface, the double bill of Bad Adam and Pony during this year’s Midsumma Festival appears to be constrasting highly different pieces of work with their distinct moods and tones. However both these shows leave us questioning what it means to be a gay man and how gay male sexuality is perceived both by society – but more importantly – by us.

In Bad Adam, the title character (creator and performer Dosh Luckwell) spends his time in “Club Eden”, a sex on-premises venue, where we follow his various experiences and are privy to his thoughts during these moments. The overt religious imagery and themes throughout Bad Adam, such as the apples, the lit-up cross on the floor and our protagonist’s namefor example, worked well in subtly exploring the idea of sexual repression and suppression and the conflict the two forms of pressure often present with each other.

Given Luckwell is the creator of the live art project Sex Poetry Booth, it is not surprising he has a way with words and the language used and the way it is presented in Bad Adam is indeed quite poetic and intriguing at times. Yet while we see a vulnerable, lonely and conflicted side to Adam, a number of scenes were too similar in execution. This lessened the impact of the overall work and impeded us in retaining an interest in Adam which, in a one-man show, is pivotal to its success. 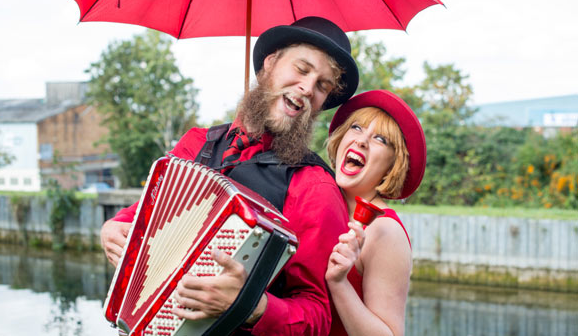 On stage for the first time together with their first-ever full length cabaret show Strangely Flamboyant, Claire Healy (Flamboyant: Like a Flame but Buoyant) and Strangely (Roaring Accordion) deliver an entertaining evening consisting of a mis- mash of clever and humorous performances, dialogue and songs.

The two establish great camaraderie and bounce off each other well in repartee. Their ad-libbing with one another and with the audience allows their distinct personalities to shine through during the show and for a stronger relationship with us to be formed. This is further strengthened by the intimacy that the performance space at The Butterfly Club creates, so Healy and Strangely can connect with us very quickly.