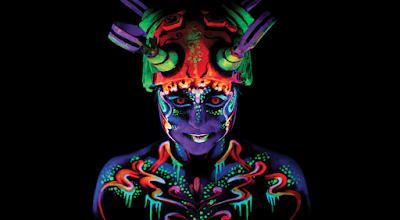 Created by champion body painter Jessica Watson Miller, Luminous is circus with a twist. The show is performed under black lights with the performers covered head to toe in various glow-in-the-dark coloured body paints and costumes that create a truly singular viewing experience.

The performers appear on stage, reminding me of wild animals in the jungle as they slowly slither, slide and stalk into the space. At various points throughout the night, the body painters (themselves dressed head to toe in black so they are almost invisible) rub the paints on one of the performers, thus gradually bringing him to life. It's a visual feat that is exciting and intriguing to watch.


There is always a risk with any live performance, and especially with circus, that things will not always go according to plan. Unfortunately, many of the tricks did not go to plan on the night I attended, and perhaps we can put this down to opening night nerves. Juggling items were dropped, hoops not caught and there were some wobbly moments during the adagio routine. To the performers credit, they persevered and continued with the routines but I did feel like the show was not as smooth and polished as it should have been. Furthermore, there were technical issues that occurred on the night with noises coming from backstage and at times, issues with the sound and lights.

However, moments like the juggling of the orange UV balls did manage to hit the right mark. The juggler incorporated bouncing the five balls on the floor and back into the cycle and the speeds at which he reached and the variety to the act was very impressive. The partnered aerial silk routine was also one of the stronger showings in Luminous. The soundtrack throughout the show was used well and helped enhance the primal environment we were witnessing.

While the idea of a circus show performed in glow-in-the-dark paint is unique, overall Luminous did not leave me with a yearning for more. Yes, the aesthetics were absolutely captivating and engrossing but the acts themselves need some more work to really create something memorable.

* Original review appeared on Theatre Press on 18 September
Posted by Myron My at 19:18