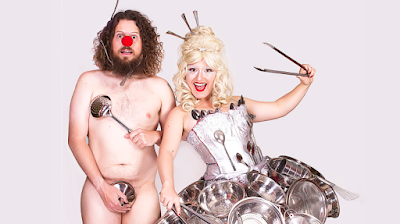 What do a singing octopus, a mystical crow, an old woman who speaks little English and Wayne have in common? Not much, unless of course you're referring to Choo Choo Troupe's The Lost Lost LOST Cabaret. Presented as part of the Melbourne International Comedy Festival, the variety show enlists a number of performers from across the Festival to showcase their unique set of skills.

Taking reign of the proceedings is international award-winning chanteuse clown Sharnema Nougar and her loyal confidante, Pinky-Von-Sox (David Tieck). Nougar wears a most brilliant colander-skirt with Pinky making as much use of a funnel, red nose and cat ears as possible. The banter between the two is entertaining to watch, as is Nougar's interaction with the audience. It is impossible to not immediately warm to her, especially during her spontaneous playful turn with an audience member's Pavlov's Dog-like response to her clapping her tongs. 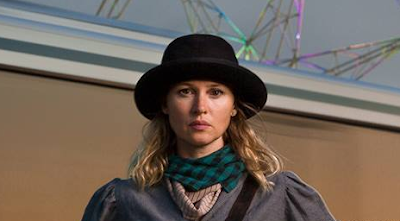 Immersive theatre performances seem to be growing in Melbourne, and I could not be more thrilled about this. The latest offering devised by Jessica Wilson, Ian Pidd and Nicola Gunn is Passenger, a show that takes place on a moving bus that drives us through the streets of Southbank and the Docklands where we observe two strangers strike up a conversation.

It all begins innocently enough, but as the trip progresses the conversation steers towards something darker and sinister that culminates in a highly intense and somewhat surreal ending. Gunn's text drip-feeds information to us and the way that earlier shared stories or anecdotes are used to bring it all full circle are clever, surprising and make full use of the local infrastructure to build on the environment and tone of the story. 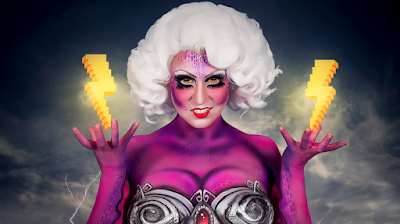 Have you heard the legend of The Worst? A game so terrible, that time itself has tried to wipe it from the memory of all living beings? But its creator, Clara Cupcakes, is not so willing to have the game disappear and never see the light of day again, so she's bringing The Worst to the Melbourne International Comedy Festival where everything will finally be exposed. While this appears to literally be a show about Clara inventing a video game staring herself as an octopus, there is a lot more going on than first meets the eye.

"The Worst started as a show about my terrible ex-boyfriend. Doing a show about your ex is a bit of a comedy cliché and I wanted in," she tells me. "But as I started writing it I realised I actually didn't care about him at all anymore, so while it's still about that time in my life but the part I still have feelings about, which is how I was the worst. WOAH THAT'S THE NAME OF THE SHOW! WOAH IT ALL TIES IN!" 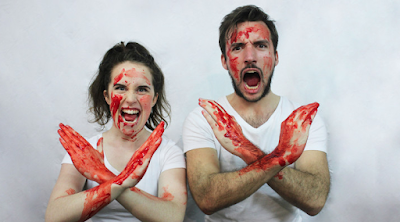 We've all had that moment going through our Facebook feed and see the 17th meme from someone in two hours, or another baby update or another instance of keyboard activism and wonder why exactly we are friends with these people. Returning to the Melbourne International Comedy Festival, Honor Wolff and Patrick Durnan Silva's CULL delves into the deep dark recesses of social media as they bring to life all the annoying people we so desperately wish would leave the platform, or at at the very least, unfriend them.

The show is based on a conversation that Silva and Wolff had about the 'personalities' that appear on Facebook and with the constantly changing ways of using and interacting with social media, there have been some changes made to the show since its initial prodcution. "Whenever we see a new social media trend or meme that’s really funny or bizarre, we seek to include it in our show," Wolff tells me. 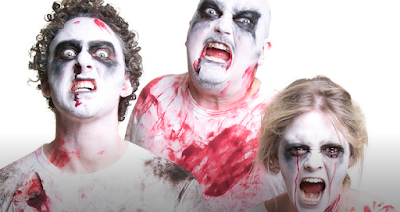 In the 2015 Melbourne International Comedy Festival, Watson asked us Who's Afraid of The Dark? This festival, well frankly they don't really care, as they premiere their brand new show Go To Hell! While this is another blend of horror and comedy, what sets this show apart and creates further interest is that Watson will be delving deep into fear itself and have audiences facing their own nightmares in an evening of scary storytelling and laughs. The trio that make up Watson, Adam McKenzie, Tegan Higginbotham and Liam Ryan, are also the recipients of the prestigious Moosehead Award this year, which provides grants for Australian comedians wishing to perform new and unique works, and by its description, Go To Hell! will definitely be leaving its mark on audiences.

"There are two things you can expect, when you come to see Go To Hell!" McKenzie tells me. "The first one is comedy and the second one is that you will literally shit yourself with horror. We wanted the show to be funny and terrifying. This time round we are at the Malthouse Theatre and there's going to be a good balance of lots of scares and lots of laughs." 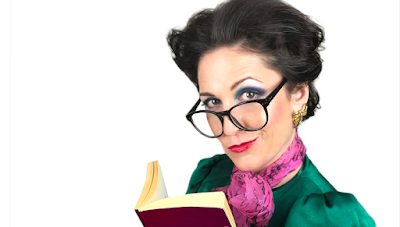 We all want a bit of romance in our lives. Those feelings of butterflies in your stomach when you see your beloved's face, and your heart skipping a beat at the sound of their voice are sadly not often experienced. During the Melbourne International Comedy Festival, Rama Nicholas is bringing her own romantic tale to life with her new show, The Lucky Ones. As Carmen Walters, Nicholas takes the audience on a wild passionate ride of love, lust and sex. While Carmen may appear to be a seemingly ordinary middle-aged woman, her stories are bound to leave you feeling hot under the collar, and that's just for starters.

"Carmen Walters is a romance and erotica writer! She is a warm and bubbly character with a sharp whit and a whimsical heart, she loves romance and telling romantic and saucy stories." Nicholas explains. "She was born because I wanted to do my next show as a romantic comedy adventure and explore the themes of romance, romantic relationships, love and sex. So I created her character as a way in to the stories I wanted to tell, she is the narrator and she guides the audience through the show." 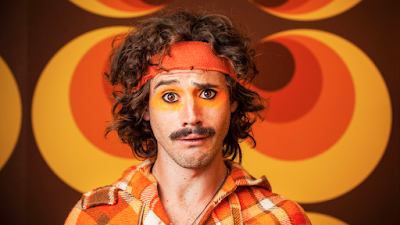 Dani Cabs is part Latin-lover and part human pleasure-machine who can't wait to unleash his unique brand of comedy and clowning to audiences during the Melbourne International Comedy Festival - or at least his alter ego Poncho Orange can't. The self-titled audience interaction focused show is unscripted and improvised with Cabs hoping that audiences open themselves up to go along for the ride in his unforgettable tale of passion, desire and pure silliness.

Cabs hadn't always wanted to be a performer and originally studied photography where he completed an Honours degree at the Queensland College of Art, and subsequently began lecturing on the craft. The change to performing was a gradual realisation but one that was a natural progression for Cabs. "While studying photographic art I always came up with projects where I had to put myself in front of the camera and play silly games with video, stop motion, and so on," he tells me. "I guess my practice heavily involved self portraiture but it wasn't until I was simultaneously working as a lecturer in photography - performing to my students everyday - and studying my honours, that I realised I was interested more in the performance aspect of my projects than the documentation. So I've always been performing - the only difference is - I now perform to live audiences as well as cameras." 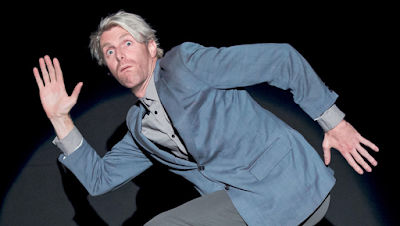 I first came across Trygve Wakenshaw by chance when I randomly bought a ticket to his show Kraken, and I was amazed by his skill in storytelling, comedy and his physicality. Fortunately, Wakenshaw is back at the Melbourne International Comedy Festival with his new show, Nautilus, which will once again showcase his impressive clowning and miming ability.

I'm curious as to the ocean inspired names for his shows: Squidboy (which is quite obvious), Kraken (a legendary squid-like sea creature that is said to live off the coasts of Norway) and now Nautilus (a mollusk). However, it's more than an ocean theme running through these shows as Wakenshaw informs me, which also ends up being an apt description of himself. "It's not just ocean themed, but cephalopod themed," he explains. "Cephalopoda are squids, octopus, nautilus and cuttlefish. They are clever strange mysterious creatures. I was interested in them while I was making my first show Squidboy, after that it was just running with the theme."