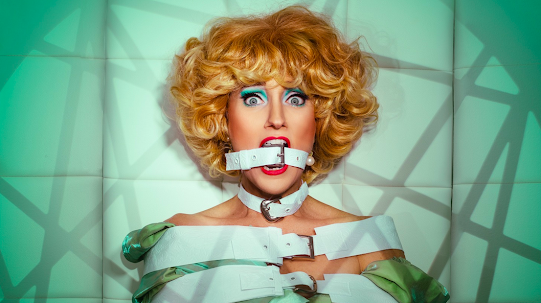 Acclaimed performer Leah Shelton returns to Melbourne Fringe with her third solo show, BATSHIT, in which she explores the history of female madness. While it brings to light how mental health was - and still is - utilised to control women, the main source of inspiration comes from a more personal connection, Shelton's grandmother, Gwen.

"My grandmother was incarcerated at the Heathcote Hospital mental institution in Perth, and she was given a cocktail of drugs and ECT treatments without her consent for basically wanting to leave her husband. This was in the 1960s, but the pathologisation of women is still a real problem today," Shelton tells me. "Women are often framed as hysterical, irrational, mentally ill in a court of law as a way of undermining their credibility or they are seen to be imagining symptoms in a medical system. They're also twice as likely to be diagnosed with depression, anxiety, panic disorder, phobias, suicidal ideation, suicide attempts, eating disorders and PTSD, and seven times more likely to be diagnosed with borderline personality disorder, so it’s fair to say it’s a long-standing systemic problem."

Shelton has long been interested in this topic but taking something as personal as this, and turning it into a twisted and riotous final product proved to be quite challenging. "It has been a real journey. The research process for this work was confronting. I submitted a Freedom of Information request for my grandmother’s psychiatric files and surprisingly we received all of her case notes from her three months in the institution," Shelton says. "The reports were worse than I might have imagined. They were full of judgemental, condescending and gendered language from doctors and nurses, consistently implying that she was detained because she wanted to leave her husband and then deemed “cured” when she returned compliantly back to her husband after treatment."

"Because I wanted to honour and respect my grandmother’s story, as part of the creation of the work, I invited my mum into the rehearsal room, which was daunting at first for both of us!" Shelton recalls. "Mum was so open to the process, storytelling and reflecting, and so her voice became a strong presence in the show. It took a lot of experimentation to both represent the true story and to find space for the surreal, camp, and ridiculous. But I think we have built a world that manages to do both!"

Having previously presented Terror Australis and Bitch on Heat, Shelton sees BATSHIT as the conclusion to a trilogy of work that tell a deeper story when seen as a continuation of each other. "They do speak to each other when placed together and maybe someday we can have a season of all three works side by side! BATSHIT references the Australian Gothic landscape of Terror Australis, and the oppressive female expectations of Bitch On Heat. There’s also a kind of journey of the voice, from my being mute and entirely lip-syncing in Terror Australis, to speaking only four words in Bitch on Heat and then this work sees me speaking firstly through a gag to finally speaking in my own voice in a heartfelt letter to my grandmother."

And in seeing out this trilogy, Shelton is once again teaming up with Ursula Martinez as her director. It's a successful partnership that has been particularly crucial with this production. "Ursula has so much experience making autobiographical work, which has been vital within this process, and she has a sharp attention to detail which I love! In BATSHIT I have stepped outside my comfort zone, finding a more stripped back, “authentic” approach to performance, which was an incredibly vulnerable process for me but one of which I am really proud of."

1) If you had to name your child after a vegetable what would it be?
Haricot Verts
2) Which reality TV show would you most like to appear/compete on?
You couldn’t get me on reality TV! I’ve seen behind the scenes and I don’t trust that agenda!
3) How many seconds can pass before you can't eat food off the floor?
Depends on the food!
Sloppy food = no go.
Biscuits or toast = 5 seconds easy.
4) What's a song that sums up your life?
Currently ... Batshit by Sofi Tukker is my theme song.
5) It just isn't a Fringe Festival experience without ... dashing from venue to venue to perform a late-night club spot.