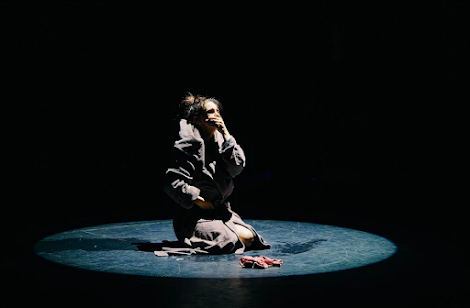 Fresh Creative Entertainment's Relate is a multiple art form show that weaves through the lives of seven people and the challenges they are facing. Based on personal events and interviews with people who have experienced difficult and traumatic relationships, a range of issues are explored including domestic violence, the death of loved ones and coming out to a religious family.

The writing is considered and thoughtful and while it's clear care has been made to retain the authenticity of these situations, there are still a few instances when dialogue feels unnatural. There is also a scene when a character is told he must support his family and stop being an alcoholic by "being a man". It is a problematic phrase and surprising that it is mentioned in this play given the topics it deals with, as it brings its own damaging stereotypes and generalisations on what makes a man and the expectations that men face in society.

Relate uses several dance numbers to allow us to delve deeper into the mind-frame of the characters in a way that dialogue would not have permitted. The majority are articulately and powerfully executed, including a choreographically inspired performance by Chantelle Fava as Sheree, an exhausted and desperate victim of domestic abuse and wife to an alcoholic husband.

Another performance between new parents Alana and Max (Madeline Pratt and Tyrone Anthony) to INXS' Never Tear Us Apart, is incredibly sensual and sexual and the highlight of the production, but that and a burlesque routine feel out of place when dealing with sensitive issues around grief, mourning and abuse. Relate also incorporates circus into the show with Aaron Campbell’s balancing act with a ladder. It is a fascinating representation of the character’s emotions, but it is unfortunate it had to be pre-recorded and projected on a screen, thus losing its intimacy and impact. Finding an alternative act that would be possible in the space would have benefited the story and the character far greater.

With committed performances by the entire cast, particularly Fiona Macys and Fava, Relate provides us with hope that we can and will get through tough times. While there are a few shortcomings, this is a admirable production that wears its heart on it sleeve and genuinely seeks to connect with its audience.

Relate was performed between 7 - 9 October at the Bluestone Church Arts Space, Footscray.