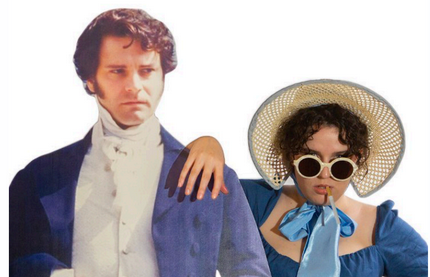 When you've made some incredible cabarets around dinosaurs and under water creatures there's nowhere left to go but Jane Austen, and that's exactly where Picked Last For Sport have gone with their new Melbourne Fringe Festival show, 2 Proud 2 Prejudiced: An Austen-tatious Cabaret.

It's a bonnet heavy evening of harmonising as the quintet delves into the lives and stories of the five Bennet sisters. Each of the cast (Sarah Edgar, Ryan Smith, Sean Sully, Melissa Viola and Freya Long) take to their characters with exaggerated but committed energy, particularly Sully as the very sensible and dry Mary and Viola as the youngest and most excitable sister Lydia.

For those - like myself -who are not familiar with the Bennet family, the cast gives us a lovely musical introduction to the girls and the supporting characters, like the dashing Mr. Darcy - although that performance could be described as a little bit flat. With musical accompaniment by Sully - and at one point by Long on guitar – each sister has her own moment to shine, as they tackle a few musical genres and styles.

While the specificity of the source material helps guide 2 Proud 2 Prejudiced's content, it also seems to hinder it. The stories and songs performed begin to blend into one another and don't allow for the brilliant creative levels reached in with the company's previous shows, including their set and costumes.

Picked Last for Sport clearly have a love for Austen and her writing (they sing about it!), and while 2 Proud 2 Prejudiced could be seen as a tribute to her, there needs to be something more to this production, an edge that will have both fans and non-fans wanting more of this Austen tale and the Bennet sisters cabaret.