Jackson Peele is bringing the fear of beep tests back with his new musical theatre play, The Beep Test 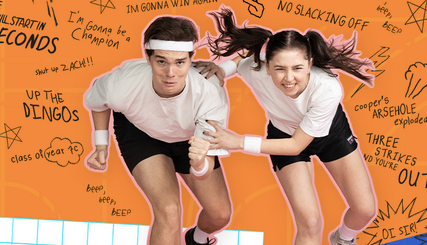 The beep test is a fitness test where people run back and forth between two points. A programmed beeping noise determines the running speed that must be maintained which increases and decreases as the test continues. But in the case of the Melbourne Fringe Festival, The Beep Test is a musical theatre comedy piece presented by upcoming writing duo Jackson Peele and Conor Neylon. The musical follows four highly competitive Year 7 students as they compete to win top place in the beep test, whatever the cost may be.

While The Beep Test had positive responses at its Perth Fringe season, Peele was not initially convinced of its potential when approached by Neylon. "The concept was Conor’s idea and to be honest, I really wasn’t sold at first. We’d been (and still are) trying to write the great Australian musical! I kid, I hate pretentious shit," Peele laughs. "But it genuinely was Conor’s idea and I did take a hot second to come around."

"We knew from the start the show would be taking place within a school beep test and that it was going to be a comedy. We both grew up doing the test and know how dramatic but hilarious that period of life is. There’s also something so quintessentially funny about the Australian zeitgeist of the 2000s, it’s hard to explain unless you grew up then, but that whole world of zooper-doopers and ‘no hat no play’ is very nostalgic and entertaining to me," he continues.

"The show quickly became about four students and one teacher, and then a lot of the inspiration came from this mish-mash of personal experience and following my instinct as a writer. I did the beep test in school, played a lot of football, and have grown up with people like the characters in the show, so the world we were presenting was pretty clear to me. You can always surprise yourself when you have characters with clear trajectories and objectives. You just let them run into each other wanting different things and let them try to work it out! Stuff pops up! It may not be easy but I love writing musicals, I really do, but I also hate it."One thing Peele particularly loves about writing musicals is his collaboration with Neylon and their process in creating new works. "Conor and I work slightly differently with each project, but it’s always an incredibly rewarding experience and I honestly couldn’t imagine working with anyone else on a musical. Conor is more at home in the music corner and myself in the text corner. However that’s by no means a maxim. It depends on the show for us," he tells me.

"For The Beep Test, Conor approached me with a draft of the opening number (which is a completely ridiculous mash up of the opening of Sweeney Todd and the Pokemon theme song). After receiving the first draft, I spent some time figuring out who these characters were and defining clear objectives and relationships between them. We then reworked the number using that information and it just took off from there, which was great. We’re lucky in a way that we share a lot of the same instincts as writers, we tend to like a lot of similar art and we trained in musical theatre for three years together, so we share a lot of the same artistic language."

The changes the show has had since its debut season has given Peele the opportunity to see the work through fresh eyes and to challenge himself with a more layered and considered piece of theatre while maintaining its fun and energy. "We’ve given the audience more time with one of the characters and tidied up some pacing within the text. Conor’s also added a whole bunch of KILLER HARMONIES AND BACKING VOCALS! We were listening to them as a team the other night and I think that’s going to help recalibrate my brain to new possibilities within the staging," Peele explains.

"Aside from that there’s an almost entirely new cast and production team, so that’s going to yield some totally different results in the rehearsal room. We’re super collaborative in rehearsals, so what you will see at the Fringe Festival will be what we found as creatives together! I wouldn’t want to direct the work again without knowing there’s a whole new set of challenges. I get bored pretty easy so the work needs to be personally stimulating for me to direct it, and this season is! We’ve got the most amazing team and Theatre Works are such a supportive venue, they do everything they can for the artists. There are definitely exciting times ahead!"

1) If you had to name your child after a vegetable what would it be?
Dragonfruit? Yeah, Dragonfruit, yeah maybe give them a title as well, so it’s like… Lord Dragonfruit… yep, nice.
2) Which reality TV show would you most like to appear/compete on?
When I was growing up I always wanted to be on Survivor, but now that I’ve grown up more I really don’t want to be on Survivor. It seems like the world is headed that way anyway, so until then I’d really like to avoid a Survivor-like situation at all costs.
3) How many seconds can pass before you can't eat food off the floor?
Every surface is kind of a floor right?
4) What's a song that sums up your life?
Oops!...I Did It Again by Britney… dark…. but such a banger…
5) It just isn't a Fringe Festival experience without… SEEING AS MANY SHOWS AS POSSIBLE AND REALISING THAT YOU’RE SO EXHAUSTED BUT THRILLED TO BE ALIVE AND DOING THEATRE AT THE SAME TIME!