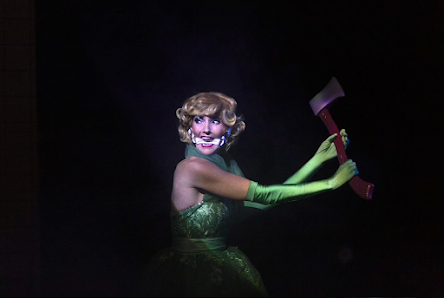 Leah Shelton's grandmother spent three months at Heathcote Hospital mental institution simply because she wanted to leave her husband. She was diagnosed as schizophrenic and listed with having various symptoms of "hysteria". In BATSHIT, Shelton digs deeper into her grandmother's incarnation as well as the scores of women through history who have been labelled crazy, hysterical or a nutjob (to name a few). It's a uniquely Leah Shelton show with plenty of surprises and awakenings along the way.

If anyone knows how to make an entrance, it is Shelton. Wearing a flowing emerald green gown and gloves and looking like she has just walked out of a hairdresser with her blonde bob, she is the perfect combination of a Hollywood starlet and a Stepford wife - apart from the gag in her mouth and an extended limb. It's a skill that Shelton utilises throughout the show, where she can simultaneously entertain while having a mood of disquiet permeating in the space.

The clinical set design also by Shelton consists of a chaise lounge with boxes of patient files stored underneath. Stark lighting and white tiles runs along the floor and wall. To the left stands a television with a small vase of flowers on it, creating another contrast between the institutionalisation of women and the idea that they should be happy housewives sitting at home watching television all day. Under the directorial eye of accomplished performer Ursula Martinez, this theme is repeatedly returned to in effective and imaginative ways that puts us in the shoes of these women.

Sound and light are critical to BATSHIT’s success, and Jason Glenwright's lighting design elevates the tension and horror of what is being explored through clever interaction with Shelton's performance, including a wonderfully disturbing lip-syncing number. The sound design by Kenneth Lyons is a haunting and eerie soundscape that moves between white noise and piercing ear shattering effects.

It is not groundbreaking knowledge that women have been pathologised and controlled by the patriarchy for centuries. However, Shelton's unrivalled stage presence and her confidence with the material, allows her to inject darker and more twisted elements that leave the audience considering this from a different perspective and to get angry, and remain angry, for Gwen and the countless other women who were and are marked as mad for just wanting to live their lives.

Click here to read our interview with Leah Shelton.