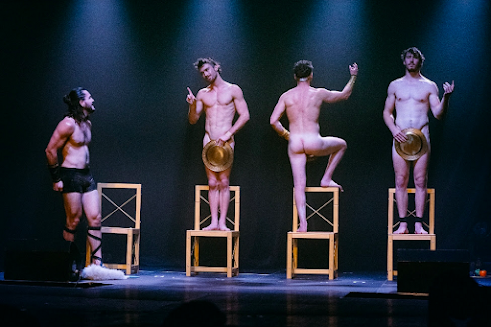 Who knew the ancient Gods of Olympus excelled in acrobatics and circus performance? But the brains and bodies from Head First Acrobats have done their research and with their Melbourne Fringe Festival show GODZ, they present, with one hundred per cent certainty, what actually went down during their reign.

The loose narrative follows the four misbehaving Gods - Cupid, Dionysus, Hercules and Apollo  (Liam Dummer, Jordan Twartz, Callan Harris and Thomas Gorham) - who are getting a bit too rowdy for Zeus' liking, particularly demigod Hercules. While this might not be what the Gods were expecting, for the audience it turns into an evening of untamed and shameful pleasure that even Dionysus would’ve been proud of, especially when a pair of saintly sisters come to visit.

Head First Acrobats have worked hard at infusing laughter into the show, and at times, you could easily think you're watching a sketch comedy but when the artists get cracking (in more ways than one) with their tricks and acrobatics, they hold nothing back.

The cast use their Gods as inspiration for their acts, so it is fitting to have Dionysus start using his makeshift wine glass in a diabolo routine or have Cupid hit new heights balancing on stacked chairs and being spun around the room on an aerial strap. Their bodies are put through the ringer with flips, twists and jumps. Even when using props and various apparatuses, it’s the strength, flexibility and athleticism that they possess that is put under the spotlight.

There is some nudity in the show but it is done with cheeky humour and fun. What is really great to see in GODZ is that a troupe that consists of mainly cis straight males, are not only comfortable with being naked on stage but being naked together and being physically close to one another without recoiling in mock horror or trepidation about doing so.

Head First Acrobats are first and foremost people-pleasing circus and with GODZ they have gifted us mere mortals with a winning production that is as electrifying as Zeus could have ever hoped he was.

Head First Acrobats also have a children's show running during Fringe too. Details below: