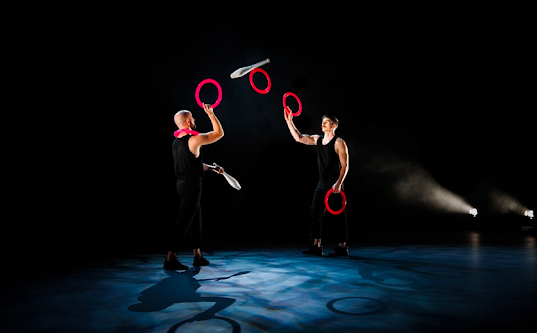 When most people think of juggling, they think of a person throwing balls in the air for as long as they can. But after seeing Throw Catch Collective's Escalate, you not walk away from a great night out, but with an appreciation and understanding of just how exhilarating juggling can be.

Presented as part of the Melbourne Fringe Festival, jugglers Byron Hutton, Richard Sullivan and Samuel Kreusler take their balls, clubs and rings, and combine them with music, sound, lighting and choreography to deliver a truly unique circus experience. Instead of throwing items in the air, the trio throw them at each other, around each other and even through each other. The hand and body movements often resemble something you would see in contemporary dance with smatterings of ballet-esque motions. The intricate routines they perform require precision timing from everyone as arms interlock in rapid actions.

Aside from juggling, Kreusler also composes the music for Escalate and cleverly draws you in to each act in various ways. At one point you almost enter a trance like state from a makeshift ticking clock soundscape as the performers juggle in time to the sounds. Kreusler's guitar playing leaves the audience fully enveloped by the music and subsequently be still in the moment and absorbed by what is happening on the stage.

Nick Moloney's lighting design adds to the excitement and uncertainty of the evening. At times, the performers stand in a small lit up square with the rest of the stage shrouded in darkness, contemplating the idea of an unknown world, about what you can't see or what you can discover. It's also a constant surprise of how light and shadow can be used in terms of colour, placement and depth, particularly when the entire stage is lit, reinforcing the limitless possibilities that juggling can reach.

Throw Catch Collective have dished up quite a spectacular show with Escalate. Their inclusion of music and lighting as a supporter and driver of the production, allows Hutton, Sullivan and Kreusler the freedom to play, explore and experiment and in return, the audience is able see something familiar in a completely different way.