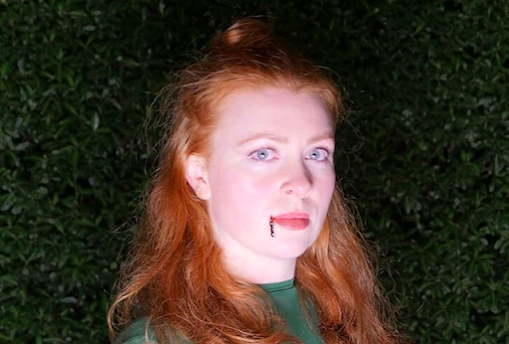 Shut Up I'm A Vampire is not your traditional vampire story. Presented as part of the Melbourne Fringe Festival and written and performed by Jessica Stanley, the show follows a woman who has been bitten by a vampire and attempting to come to terms with her transformation. Except that it's not. It's about something bigger and deeper and human.

Stanley plays Sophie, who is on a journey to discover what happened to her on that fateful night. Along the way we meet her friends, doctor and a dark, brooding stranger looking for their cat, all of which help Sophie put the pieces of the puzzle together. For the most part, Stanley takes on the roles of all the supporting characters and she makes sure that even if they have a few lines of dialogue, they come across as fully fleshed out characters with backstory.

Stanley is a great storyteller, and her use of highly descriptive language consistently paints vivid pictures of Sophie’s feelings and her changing environment. The humour and rhyming she intermittently injects into the script without it being intentionally funny is quite skillful and as you listen out for more of it, you simultaneously get drawn into the plot.

Live sound accompaniment by James Cerché supports the mood shifts in Sophie's mind and in ramping up the tension, confusion and urgency as the story progresses. There are times however when abrupt lighting cues occur, mainly in the first half, that pull you out of the scene and leave you questioning why that happened at that moment.

As with her previous work JSMR (seen at last year's Melbourne Fringe Festival but also being staged this year), Stanley has taken a heavy topic and moulded it in a way that almost doesn't take itself too seriously while displaying tremendous care and compassion as to how she presents it. What Shut Up I'm A Vampire lacks in vampire bites, is more than made up for with this nail-biting tale about a woman trying to face her truth amid all the darkness.

Shut Up I'm A Vampire Details