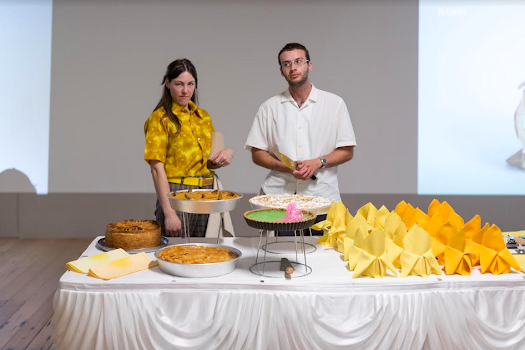 If there's one rule to be aware of when going to the Melbourne Fringe Festival, it's to expect the unexpected and open yourself up to new adventures. Okay, so maybe that's two rules. But in Long Prawn's Live Leisure Yabby Fishing Restaurant, both these statements ring true. During the last weekend of the festival, the public will be given the chance to flex their fishing skills as they are given a rod for an hour to go fishing for yabbies. Catch one, and pass it to renowned chef Lorcan Kan who will cook it for you on the spot and create a delicious yabby snack.

For the brains behind Long Prawn, Frederick MG Mora and Lauren B Stephens, the appeal in putting together an event likes this stems from wanting to offer unique dining experiences while subtly asking people to think about the various stories of where our food comes from.

"We seek interest in the aspects of food completely tangled into folklore, tradition and obscurity. The kind of stuff you hear from old aunties or uncles, the idle chat between chefs or those who eat like it's life's purpose," they explain. "Fishing for yabbies is quite the national pastime. Essentially they are fresh water lobsters, so while the practice is somewhat backwater, as a food they are incredibly overlooked. When thinking of how to make this happen at Collingwood Yards we recalled the widespread prawn fishing restaurants across South-East-Asia and Taiwan that do this all night long. So we fused these two established ideas into a new context."

In order to bring this restaurant to fruition, Long Prawn reached out to Things Palace chef Lorcan Ka, who will be readily waiting to cook any caught yabbies. "Melbourne isn't the biggest pond and when we heard Lorcan was back in Melbourne doing some great events via his Things Palace pop ups we had to check them out," they tell me. "The dinner we went to was securely focused on chicken. Every course with the exception of dessert (sadly) used different parts of the chicken. While the huge and somewhat haute chicken nugget was a stand out, Lorcan's incredibly simple, nourishing and flavourful hainanese chicken was the stand out and we knew we needed to have him involved."

While it's all fun and fishing during this event, which also includes live music and entertainment, Long Prawn hope that people walk away with more appreciation for not only the yabby they just ate, but food in general. "The more focus we can have on local and endemic species of seafood the better off we all are. Perhaps people may think of them as an alternative to farmed or imported seafood this summer? Or better yet, have the impetus to go out to a dam to find them themselves."

Some may say that making a spectacle out of fishing for yabbies for our own entertainment and earning bragging rights about having caught one is a cruel punishment for the humble yabby, but that is what Long Prawn wants diners to examine. "I think we have all come accustomed to receiving our meat and seafood processed and packaged, so we believe that if people have a deeper understanding of their food as a living thing and engage with it at that point, we can all invest in more humane food systems," they say. "If you are eating meat or seafood without the sensitivity towards that animal once being living then there is an issue here. Long Prawn hopes people feel connected to their food and the process before they decide to eat it. It is worth mentioning that the yabbies are not hooked or hurt before they are rendered inactive in an ice slurry (as per the RSPCA recommended dispatching guidelines). The fact that you are doing this closer to the kitchen one could argue is better for both you and the animal."

"The miraculous thing about food is it has the ability to be the focus or just the canvas for conversation. It can drift in and out of our consciousness while we participate, which makes it the perfect companion for traversing ideas. It disarms us in a way that allows our truths to come out, and as a common ground is community building. It is this innate ability that food has, which interests us far beyond its capacity to make us full."

1) If you had to name your child after a vegetable what would it be?
Snake Bean.
2) Which reality TV show would you most like to appear/compete on?
Iron Chef.
3) How many seconds can pass before you can't eat food off the floor?
For others 0, for ourselves depends on the floor.
4) What's a song that sums up your life?
Superorganism's The Prawn Song
5) It just isn't a Fringe Festival experience without ... a full heart, a confused look and a wild time.