Back at the gym again. Liking the routine of it. Still struggling with the ab curls though, which I could practise at home but then I'm like "nah". But I can already feel my cardio is improving and the weights do seem easier. I have my PT session tomorrow so hopefully he'll say I have as well!

I've also suffered my first casualty during my fitness. Big blister on my hand - clearly not a man who's used to such labour. Hopefully it's the first and the last.

In the afternoon I headed to the Trees Adventure Park in Belgrave. Basically it's a number of tree top obstacle courses that also includes flying foxes. It's a lot of fun but physically quite demanding and a little daunting initially when you see how high up you are. 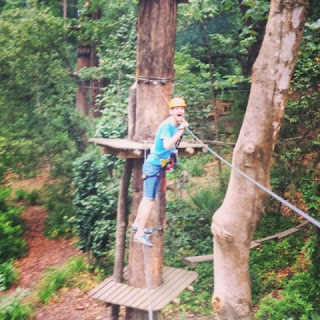 The long black course (or Oh LaLa as its known at the park) is by far the hardest. It's physically so demanding my legs and arms were shaking so much. There were moments I just wanted to give up but I was in the middle of an obstacle and to give up would be quite embarrassing. To make maters worse it started raining too so the wood was a bit slippery too.

By the end of the two hours I was covered in so much sweat and rainwater, I didn't know which was which. My legs and arms are killing me. Had to use a lot of upper body strength throughout.

A lot of fun but it's not easy/relaxing fun. Think tomorrow is going to be a killer.