I was supposed to go to a Save The Pigs Rally but I - for want of a better word, chickened out. With the research I have done, I am becoming anti-meat but I still don't think I feel that strongly enough where i can go to such an event. And without giving out any negative vibes, I don't want to be surrounded by people who are such strong activists about animal rights and think they are holier than thou that they end up turning me off a cause I am trying to ease myself in. Because those people do exist and I have come across them already and I did not appreciate it.

However, what I did do was research more into the problem and how pigs are raised and it was an interesting/disturbing read. Yet again, it saddens me that we can treat animals so cruelly and without a shred of compassion. Even if you are going to continue eating meat, I think it's still important to know where your food is coming from and making an informed decision from that. I don't believe there is a right or wrong choice here as long as you're choosing to remain ignorant. 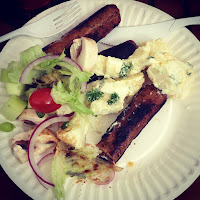 In the evening I went to a mate's BBQ which was filled with meat...and sausages. And nothing beats a sausage in bread with sauce. Am I right!?!? Fortunately, I had my vegetarian garlic sausages with me which I "wacked on the barbie". I personal wasn't really fussed if they touched the meat ones but when I did see them resting on the cooked ones there was a part of me that felt a little bit dirty. Like, somehow I had cheated and had a morsel of meat that had rubbed off onto my veggie snags.

They were actually quite nice, and really, there wasn't a world of difference between them I must say. Fortunately there was a lot of salads too so that filled me up.

But guess this is another example where a vegetarian can be seen as an "inconvenience" to big parties and so forth. I wonder what would have happened had I been a strict no meat contact vegetarian...