So today I had my first chicken burger at Lord of the Fries and I must say, I was not overly impressed with it. Filling wise, appearance and taste - just didn't do anything for me. To be honest, I have never been a fan of LotF but being vegan and me vegetarian, I thought I would give it another go. And just not taken in by it. I might keep it as my equivalent to a drunken kebab after a night out though. 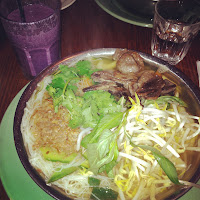 Dinner was at Yong's Green Food in Fitzroy. Big selection of vegetarian and vegan food with various Asian influences (and Italian and Mexican). My friend suggested the rawsagna, but being Melbourne and suddenly getting cold, I opted for the Pho Soup with mock-beef. My friend got the same but with tofu. It was a very big portion but again, lacked a strong taste for me. Just felt like a bunch of veg thrown into water, I don't know if it's because it was vegetarian but I doubt it as even my friend was not happy with hers. However, she did rave on about the rawsagna so next time, I will have to try that. Oh, and the liquid I am drinking, is a blueberry and banana smoothie - also, subpar :( 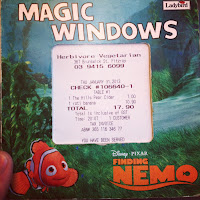 For dessert, we decided to go back to Madame K's Vegetarian Cafe so I could try their Banana Roti with ice cream and berry syrup, which I had craved last time I was there but had no room in my stomach. Glad we did, because it was absolutely divine. Just perfect, felt sorry for my friend who is gluten free and couldn't have any. The ambience was much nicer here and overall, I would recommend it over Yong's - based in first impressions of both. 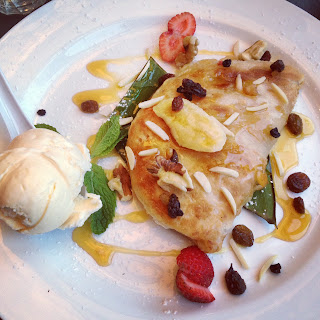 So three meals, three places with three very different verdicts! (and the picture above is the way that Madame K's present their bill! How awesome is that! Another reason to return!)