Musical theatre royalty, Ethel Mermaid is coming out of the sea 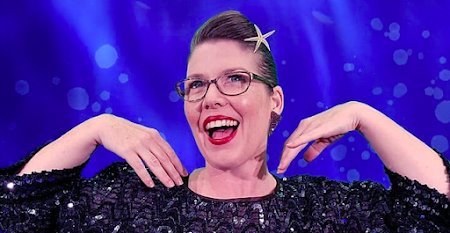 Is it really better down where it's wetter? Musical theatre royalty, Ethel Mermaid is about to let us know when she comes up to land and perform Songs in the Key of Sea at the Melbourne Fringe Festival. The creation of Melbourne comedy performer and improviser Amanda Buckley, it's an evening of music and stories on living life in the spotlight while under the sea.

"Ethel was born at The New Zealand Improv Festival in 2018 thanks to a workshop and show created by Derek Flores and Michelle Neilson," Buckley tells me. "The character came out of the workshop when I was endowed as a mermaid but one from the depths of the Hudson River. As far as improvised characters go, she immediately felt so fun. Brassy and no nonsense and although the name is definitely a pun on the amazing Ethel Merman, 'the undisputed First Lady of the musical comedy stage', it turns out that they also share a love of a big belting Broadway number."

"Just like her namesake, Ethel Mermaid is a HUGE star of stage and screen, just under the sea. A real triple threat. Earlier this year she resurfaced for a musical spot in The Nick Caddaye Variety Show (as part of Melbourne Fringe Rebound) and it became clear she needed to have her own show and here we are! Ethel now has a residency at Neptunes Palace (The Butterfly Club) and it is the soggiest ticket in town!"

Having watched Buckley perform for over a decade, she never fails to dazzle her audience with the energy she brings to her characters. "Well you are very generous! But yes, I do hope it comes across that I am giving it my all when I am on stage. I have always been that way. It is an honour to perform and if people have chosen to spend their night with me, have paid for tickets and parking and babysitting and drinks, my job is to show them a good time," she tells me. "I definitely get nervous though. I want people to come to my party and have a great night but after 20 years of performing, I know nerves are a healthy and needed part of the process. They show me I care and that I am ready."

Joining Buckley / Ethel on stage is musical director and long time collaborator Jamie Burgess. "I met Jamie performing in Impromptunes about eight years ago and I couldn't be more grateful for that happening," she recalls. "We have a similar approach to musical improv and performance. That "energy at 10" you mentioned is Jamie all the way too."
"As a pair we have taught musical improv around Australia and New Zealand, and Jamie was also with me with Ethel was born back in 2018. He knows my voice and my humour and is such a great partner. He supports me where I need support and pushes me that bit further to find out just where I can go with a song or character. He's worked with so many amazing performers like Tash York, Amity Dry, Justin Clausen so I feel very grateful to have him at the helm and at my side."

An established improvisor who has performed with companies like Impro Melbourne, Big Hoo Haa and Impromptunes, Buckley has chosen to craft a scripted musical theatre comedy for Ethel Mermaid in order to carefully construct the story for this underwater diva that pays homage to a specific era of Broadway. "We have chosen and adapted existing songs from the world of musical theatre and a splash of pop that will explore Ethel's career," Buckley says. "I am finally old enough to sing the songs that my voice is suited to, to be bold, brassy and belty and now coloured with the maturity I didn't have 20 years ago. So we have music from The Golden Age of Broadway songbook, songs that I think actually don't get much of a look in these days and that excites me."

Buckley is also excited about having an audience witness Ethel's antics and hopes the razzle dazzle and glitz and glamour on display will offer people the escapism they seek during a Fringe Festival. "I just want people to have a good laugh and be entertained. Ethel is an entertainer in the tradition of those old school Broadway Legends and I would love people to lean into that fantasy and enjoy the showbiz magic," she tells me. "There are no messages or lessons to be taken away from this show, just a good time. All you need to do is join her under the waves, Ethel does the rest, and if you leave with a smile on your face and a melody stuck in your head, both Ethel and I will be very happy."

1. If you had to name your child after a vegetable what would it be?
Kale (a shout out to improviser Cale Bain who actually was there when Ethel was created!!)
2. Which reality TV show would you most like to appear/compete on?
Great British Bake Off - cake AND Noel Fielding??? COME ON!!!
3. How many seconds can pass before you can't eat food off the floor?
None. I just cannot. My floors are never clean!
4. What's a song that sums up your life?
A random meme generator once named Katrina and The Waves' Walking On Sunshine as my theme song and to be fair, it wasn't wrong. And also Waves. Get it?!?!
5. It just isn't a Fringe Festival experience without a bop at Finishing School with DJ Andy McClelland (people still say bop right?)