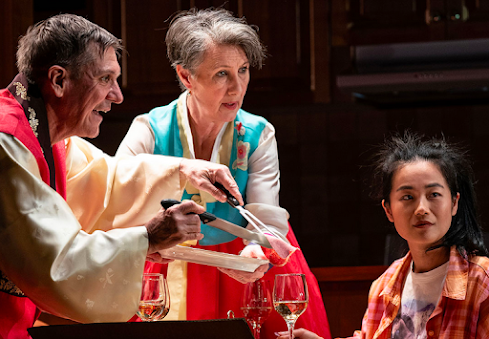 When Lucy (Susanna Qian) turns up unexpectedly at her adopted parent's house after quitting her job and ending her relationship, her parents are immediately concerned. Depressed and confused with what she wants in life, she finds comfort in an old cardboard box that used to be full of her childhood memories. Written by Ra Chapman, K-Box is a humourous and heartfelt look at what family means to an adopted child and how we should still be held accountable for our actions even when we act with the best of intentions.

There are some really tender and touching moments in the show and some that are surprising, challenging and confronting. Chapman fleshes out many thoughts and issues around adoption of children from overseas and the impact this can have on adoptees for the rest of their lives. The relationship between Lucy and each of her parents is presented authentically while still providing plenty of laughter. The change in dynamics between these three over the course of the play is gradual but sudden and is fascinating to watch unfold.

However, the introduction of a K-Pop star (Jeffrey Liu) coming to their house for dinner - and subsequently staying for a period of time - is awkward and it's unclear as to where he's come from and how he ends up at Lucy's parents house. His purpose for being there is used as a plot device to begin the conversation with his provoking questions and then he disappears as abruptly as he reappeared.

The four actors deliver strong performances, with newcomers Qian and Liu more than capable of keeping up with the incredible Maude Davey and Syd Brisbane. Qian captures Lucy's need for family and love but also her yearning for independence and belonging. The rapport between her and Davey and Brisbane is very natural, particularly in her scenes with Brisbane. Davey and Brisbane are exceptional in showing their characters' frustrations and defensiveness as they are forced to interrogate themselves on the choices they made for Lucy as a child.

Romanie Harper's set and costume design paints a perfect picture of your standard middle class family. It might not be the most eye-catching construction but it looks familiar and lived in. Director Bridget Balodis gets creative with how the actors use the space available to them, making sure that even though they are within the same 'four' plain looking walls for the majority of the play, it doesn't lessen the drama that is being played out.

K-Box doesn't end with everything resolved and everyone happy. The lights go down on a chapter and leaves it to the audience to determine how this story continues, which is how it should be. The adoptee story does not end. This is a well-considered exploration of how one adoptee sees her family, and the concept of family. Questions of identity and belonging will always exist and we must all be open to these conversations.