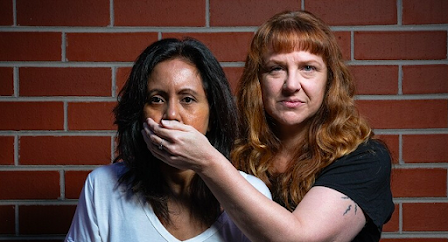 You shouldn't judge a book by its cover, but should you judge a book by its writer? Thomas Eccleshare's Heather attempts to answer that question in the Australian premiere of this play at this year's Melbourne Fringe Festival. A reclusive author is hesitant to go public despite her agent (and her fans) desperately wanting to meet her. A cat and mouse game emerges between the two with one trying to coax the other to achieve their own end.

While the plot of the play might be mysterious and ambiguous, the roles that actors Michelle Perera and Kristina Benton take on are just as vague in this thrilling drama with a twist. "I play multiple roles, which is intended to perplex, and hopefully, only for a moment, disorient the audience," Perera says. "I love that the play plays on the multiple personalities we often harbour." It's a sentiment shared by Perera's co-star, Benton. "It's what drew me to the play. That there is this exploration of the struggle to accept both the light and the dark within ourselves."

A play with numerous characters but only two actors means there are some intense rehearsals ahead for the two, but not all of them are looking forward to it. "I'm not a huge fan of rehearsal!" Benton tells me. "My favourite part is when I know the script and can really start to play with character."

"I love a good chat," Perera adds. "Whether it’s unpacking the characters or the script, or just sharing personal anecdotes, a good chat with fellow actors and the director really helps build trust, ease and camaraderie."

Heather tackles some complex issues about our ability to differentiate the artist from the work and asks if we can focus on what the story is rather than who is telling the story, something that Benton and Perera have differing opinions on. "It is possible and it's also essential," explains Perera. "Some of my favourite artists have opinions on matters I am diametrically opposed to but I value the work and not necessarily the person."

"It really depends on the art for me," Benton says. "If the art has something important to say, if it's not espousing the problematic beliefs of someone like J.K. Rowling, then I think we can put aside our misgivings about the artist for the sake of the art."

Heather also shines a spotlight on people who put on various masks and personas, which is very simple to do in this current age with social media, cat-fishing and deep-faking. But at what point does this become unacceptable and turn into deception and lies? "I think sometimes deception is appropriate if we are finagling our way out of a potentially dangerous situation. I'm honest and transparent to a fault, and dishonesty and hypocrisy are my pet peeves," Benton tells me. "But rather than make judgement upon those who hide behind masks, I think it's more empathetic to try to understand the pressure people feel with regards to appearing 'perfect'. It's a human malady."

"We do it face to face too. It’s human nature," Perera adds. "As long as the purpose of hiding behind a mask is not to pull someone else down, I am fine with whichever version of themselves anyone wants to present to me. I am a reasonably good judge of character, so I don’t often take people at face value. With time, masks do come off. Best to wait it out."

And best to get your tickets to Heather and see just what all the drama is about.

1. If you had to name your child after a vegetable what would it be?
Perea: A bean. I would relish yelling ‘hey, has been!’ during the school run.
Benton: Parsnip.
2. Which reality TV show would you most like to appear/compete on?
Perea: Naked and Afraid. Clothes are overrated.
Benton: Agree! Naked and Afraid.
3. How many seconds can pass before you can't eat food off the floor?
Perea: Ten seconds. I have a strong constitution.
Benton: Five. No more, no less.
4. What's a song that sums up your life?
Perea: You Learn by Alanis Morissette.
Benton: Alright by Kendrick Lamar
5. It just isn't a Fringe Festival experience without a
Perea: solo performance about childhood trauma being unpacked on stage, and doubling up as therapy. Love it!
Benton: running from one venue to another within ten minutes to catch all the shows.