Ellen Marning is dancing the night (and the day) away with "Nu-Disco!" 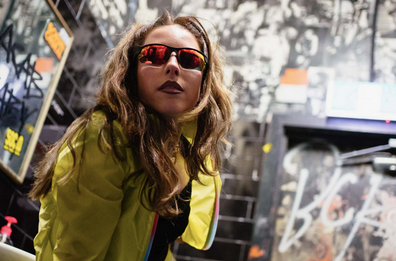 You can dance. You can jive. Having the time of your life. That's what Ellen Marning was doing in Berlin earlier this year as she immersed herself in some fervent daytime clubbing. And she's bringing it to Melbourne. Presented as part of the Melbourne Fringe Festival, Nu-Disco! takes a look at dance culture and sharing "the moment".

"I was drawn to a show set in a club space because I love dancing and wanted permission to go clubbing as a form of ‘research’ and also having worked with award-winning audio artist Robert Downie in the past, I felt a lot of trust and excitement about working with him sonically to establish place, mood and character," Marning tells me. "Nu-Disco! explores one woman’s experience at a club over the course of a night. Time stretches and condenses in a club space (at least to me anyway) and it’s a metaphor for where she is at in her life. Late 20s, confused, horny, lonely, full of bravado, full of questions, full of rage she can’t quite place. It’s a celebration of the highs and an examination of the lows that can go along with these spaces."

Marning recalls a recent visit to a club in Berlin and the intense feelings as she entered the venue, which was very different to anything she's experienced in Melbourne. "It panicked me for a moment because it had been a long time since I’d been in a space like this. The darkness. The music from another room reverberating in my bones. And these posters scattered on the walls about the precautions to take with a new injectable that had entered the scene. It was sensory overload. And then I walked out into the next part of the club and it was this open, wooden dance floor in the middle of a green oasis! Smoke machines, disco balls, pine trees, empty spa tubs you could lounge in and little nooks in amongst the trees to provide people with the opportunity for rest and conversation," she says.
"I felt like the emphasis was on the community in how much care they had taken to make people comfortable. The music could be heavy, electric, transcendent, wild, but there were spaces to rest, to take in the scenery, and even bathe under outdoor showerheads if you needed it! I danced like a maniac for a solid two hours straight and left the club in the middle of the afternoon, covered in sweat and beetroot red in the face. It was like stepping out of another world. It was absolutely glorious."

"My impression of the difference between the clubs in Berlin versus Melbourne is the endurance of it; the long-form nature of it. It’s been my experience that a night out in Melbourne is something you incorporate into a busy week, a brief moment of respite from the grind, but an event like the one I tasted in Berlin went from Saturday morning to Monday morning and you could come and go as you pleased. It was a mini festival within the heart of the city and you could immerse yourself in it for a considerable time. The club was full this Saturday afternoon in Berlin with people of all ages dancing."

Nu-Disco! isn't just a hedonistic exploration of a good time however. Marning also looks at the state of the world and how 'the moment' ties in with the contrast of dancing and letting loose as the dark cloud of world wide doom hangs over you. "‘The moment’ is different for everyone but personally it’s this strange situation between collectively going through the pandemic and lockdowns and perceiving the escalation of crises in terms of climate change, social inequity, the horrors of war, political corruption and the list goes on," Marning says.

"So maybe ‘the moment’ is us figuring out how we can serve our community and the planet while staying true to our needs as individuals. We’re so connected. The pandemic has shown us this. Climate change has been telling us this for a long time now and we’ve yet to heed the warnings. But we also want to dance, to have fun, feel safe, be challenged and grow in our lives. As a 28 year old artist living in Australia I’m trying to figure all this out. ‘The moment’ is messy."

So what is it about dancing that is able to bring people together? How does a night in darkly lit rooms, getting sweaty and feeling your pulse speed up build community? "I think it’s the combination of being amongst people, experiencing the same music, same space, moving together that, when safe in a physical, social and emotional capacity, is just so darn good for us. It’s the endorphins of dancing and singing. Seeing other people happy makes us happy and for the most part, a place where people come to dance feels like a place where we can be expressive, bold and free," Marning explains.

"I love fast-tempo techno, like 145 BPM or above. My body has to move faster than my brain can make decisions, so it feels good to get out of your head for a while. I also love a dance remix. I went out recently and they were playing remixes of Olivia Newton-John's oeuvre and it brought up so many good memories, and as a crowd we all sung along in absolute appreciation of her and her music. It bonded us for that moment in time."

1) If you had to name your child after a vegetable what would it be?
I think something a little fancy like Courgette or Radicchio.
2) Which reality TV show would you most like to appear/compete on?
Absolutely 100% The Real Housewives of Beverly Hills. I got a taste for the series in one of the Melbourne lockdowns and I’ve never looked back. I am obsessed. The Real Housewives of Melbourne would be good too but I reached out to one of the housewives on Instagram as a total fangirl and never heard back. Janet - message me back! I think I would enjoy the outrageous dressing up, the chats to camera, the drama! I’ve often joked that I could write my PhD on the Real Housewives franchise but over time it’s becoming less and less of a joke…
3) How many seconds can pass before you can't eat food off the floor?
I’d say 10, but it really depends on the floor. Sometimes it’s less, sometimes it’s more. Depends on the environmental conditions at play.
4) What's a song that sums up your life?
At the moment I am really drawn to a song by Australian artist Danika Sweet Mellow D. It reminds me of being a sensitive sort and the comfort, expression and understanding that art affords.
At the same time, Pump Up The Jam by Technotronic is pretty apt.
5) It just isn't a Fringe Festival experience without ... seeing five shows in a night, and afterwards heading to the Fringe Club to dance with all the amazing audiences and artists into the early hours.