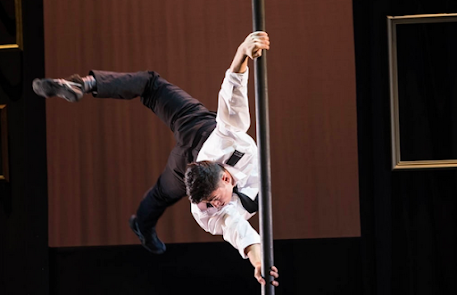 Devised by its second year students, NICA’s Circonoclasm is an exploration of the theft and destruction of the arts through circus. A new artwork is about to be unveiled at the National Gallery of Melbourne. But when it is stolen, everyone become a suspect as the investigators take unconventional, or in some cases too conventional, methods to solve the crime.

Director David Woods has a large cast of performers to play with and that he does, but unfortunately much of Circonoclasm is grounded in acting, sketch and slapstick with not enough satisfying circus. The opening in particular is drawn out far too long as we watch robbers and guards running on and off stage in varying comedic fashion like a montage of Scooby Doo gang as they are chased by (or chasing) the monster.

When we do get to witness them perform circus routines, it is engaging and exciting. The teeterboard, ropes and silks acts successfully combine humour and awe and gives those individuals their time in the spotlight. The ensemble also works incredibly well together. There is constant and frenetic movement on stage yet they all show awareness of exactly where everyone else is at any given moment. When some stumble, they’re all ready to step, jump or throw themselves in to help.

There are occasions where the comedy works splendidly within the structures of the narrative, such as when we see the circus artists recreating famous artworks. It is a great idea that is perfectly presented and could have been the springboard for the acts rather than having it all seem a bit slapdash with many coming out of nowhere or not given much stage time.

David Splatt’s set design simply but effectively brings the interior of the gallery into the venue hinting at theft and destruction of artworks with empty frames hanging along the backdrop. Two cut out panels in the backdrop give way to the “outside” where the teeterboard jumping and tightrope walking takes place. There are instances where parts of these acts are obscured by the remaining “wall”, and even though it doesn’t occur for long, it’s enough to pull you out of what’s happening.

There was potential for Circonoclasm with its focus on art, the theft of art and the current performing arts climate, but in its execution, it seems to have missed the mark. There is clearly a talented cohort of second year students at NICA, hopefully they will be able to show us this talent with their next production.