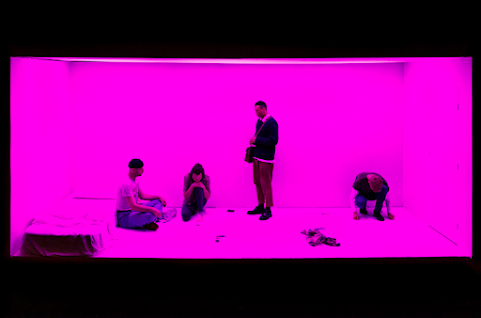 Variations or Exit Music takes a deep look at one person's three great loves and their struggle to see through the heartbreak and believe in the possibility of finding love again. Written and directed by Justin Nott, it is a personal response to his past relationships and the depression that these breaks ups brought on.

Despite its personal nature, Nott's script easily connects with his audience. The conversations, the thoughts and the dreams that are portrayed on stage, are the exact same ones we've all had - regardless of sexuality. It is intense and reflective with moments of light humour. At times, he runs the risk of mashing together a number of complex ideas with long scenes but this is balanced out with shorter, simpler exchanges, like when Justin and his partner Sam share everything they have done for each other.

The other reason that Nott's story works so well is from the exceptional work by the four actors in the show. Matthew Connell as our protagonist carries much of the emotional labour while also being on stage for the entire duration. He poignantly expresses Justin's insecurities and fears while lamenting his past loves and what could, should or would have been.

Lachlan Martin, Yuchen Wang and Joss McClelland represent each of Justin's three big loves, and while on paper they hover around similar emotions and dispositions, the actors bring individual energy and character perspective to their roles, and allow each relationship to feel very different.

The performance takes place in a lifeless and cold "shoebox" apartment. Eloise Kent's structure highlights the domestic nature of the environment without distracting us so we are able to concentrate on the dialogue. As the play progresses the space becomes more symbolic of Justin being trapped by his thoughts and past, and feels like the stage is becoming even more intimate and claustrophobic. And then the opposite happens with a stunning reveal about just how much bigger our world is.

Variations or Exit Music is a touching play about love through various considerations: the loss of, the yearning of and the fear of. While predominantly dealing with the ending of relationships, the audience gets to walk away with the hope that we can love and will be loved. They also walk away from a captivating night at the theatre.