How dough, dough and d'oh! came together for Stage Mom's new show Dough! 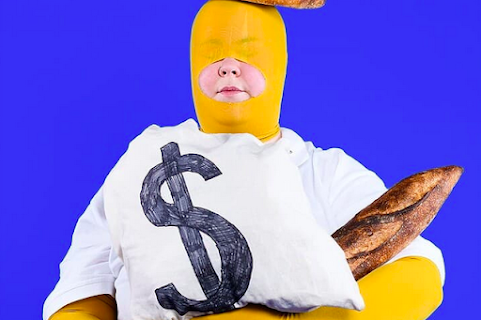 Dough. Another word for money.
Dough. Used for baking bread and pastries.
D'oh! A catchphrase used by Homer Simpson. But for the purpose of this show, let's stick with Dough.
Dough!
And that is the name of Hannah Fallowfield and Alex Thew's new Melbourne Fringe Festival show, Dough!

As with many important ideas, the concept of this show was developed through having the right conversation with the right person. In this case, it was Fallowfield and Thew finding dough (bread) and d'oh! to be a funny pair of homophones and wanting to see what happened when they brought the two together. And then money joined the party.

Part of the research for the show involved immersing themselves in The Simpsons, something that Fallowfield had (shockingly) never seen! "We sat down and watched the first 4-5 episodes of the first season, which was great. I didn't realise how wholesome the early episodes were, so that was a pleasant and unexpected learning. In my mind they were this dysfunctional family that hated each other, but at least in the early seasons that doesn't seem to be the case," Fallowfield tells me.

"After getting a feel for it, Alex started to do a bit of a "highlights reel" from each season, picking a few key iconic episodes from each one. At the moment we're up to Season 7. We literally watched The Simpsons for about nine hours straight and all of my dreams that night were suuuuper weird. My favourite storylines have all been ones where Homer has a good idea but someone else steals it - Mr Plow and Flaming Moe's were pretty incredible. I also LOVED the Lurleen episode where Homer has that fab cowboy manager outfit. Lisa's union song feels like it should get a special mention too, especially because the show is happening at Trades Hall. That's #dramaturgy!"

With a crash course in the Simpsons-verse, Fallowfield is surprised but also not surprised at just how much of an iconic show The Simpsons has turned out to be. "Alex and I were talking about this the other day and I think it's a totally iconic show! When I talk to people about Dough! and mention it's about The Simpsons, I ALWAYS get about 5 minutes of them just quoting lines to me, and then I have to tell them I've not seen it," she says. "It occupies this peculiar place in the cultural consciousness, and the fact that it has been running since 1989 says so much. I do think it's not without its controversies though, like the recent discussion about the highly problematic depiction of Apu, and I think the showrunners' response to that critique was disappointing. It's interesting when something jumps the shark, but initially it was so groundbreaking. I get the sense from conversations with people that the show has been trading off of its glory days for a long time without actually innovating, but again, I'm only up to season 7 so don't come for me in the comments!"

This is not the first time Fallowfield and Thew have collaborated on a project, and based on their past outings, this is a winning combination. "Working with Alex has been the best! We have worked together on two previous shows (Truly Madly Britney and Love You Bitch), both plays written by Alberto Di Troia (the other beloved half of Stage Mom)," she tells me. "It's been different with Dough! being a devised conceptual work and moving away from our previous director-actor relationship, but so rewarding. We have the same cooked sense of humour and are on the same page about the tone of the work, so the most difficult thing has been killing our darlings. No, Alex, we can't have a car drive towards the audience like in The Simpsons opening credits! I'm sorry!"

Dough! can be described as a performance collage of various thoughts coming together and apart in different ways, with the audience in for a number of shocks, laughter and startling realisations as they dig beneath the surface of what they are seeing. "I'm intrigued by 'liveness'.  I like seeing what happens when people gather together in a space and what opportunities come out of that and it’s exciting to bring the audience out of a passive observer state and into a space where their presence has an impact on the work in some way," Fallowfield explains.

"Comedy is also a key motivator too. This show started from such a silly homophone thought and I love it when that happens. Alberto and I often talk about comedy as a trojan horse for exploring deeper ideas and that's certainly true of Dough! Following the social history of bread and its connections to capitalism, and The Simpsons has been fascinating and it all came from something so silly and simple. So hopefully when people come and see the show they end up with some The Simpsons/bread/ATM machine/flour/yellow stockings/drag show fever dreams."

1) If you had to name your child after a vegetable what would it be?
Potato.
2) Which reality TV show would you most like to appear/compete on?
I want to say Alone because I've been binge-watching it at the moment but who am I kidding. Everyone that knows me knows I wouldn't last a day. I don't even own a tent.
3) How many seconds can pass before you can't eat food off the floor?
I feel like it depends on the food? A gummy bear could sit there for hours to be honest and I'd still eat it.
4) What's a song that sums up your life?
Break My Soul by Beyonce. This festival season is trying it, but YOU WON'T BREAK MY SOUL!
5) It just isn't a Fringe Festival experience without... missing everyone's shows because they all sold out and you tried to chance a free ticket with your artist pass. Soz.