Traversing the after life with iconic superstar Juniper Wilde 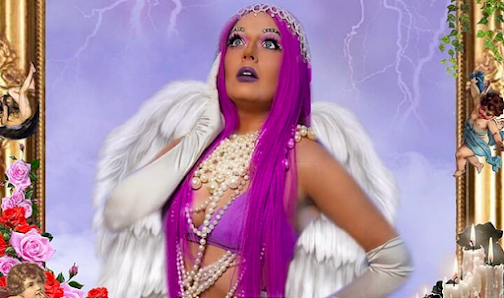 Just when you thought it was safe to go back to the theatre, Juniper Wilde is back with more zest for life than ever be- oh, she's dead. That's right, the icon that is Juniper Wilde has died after losing a lip-sync battle in Hades. But fear not Wildlings, because Juniper has a plan to return to the world but it does involve making a deal with the devil.

If that brief synopsis of Juniper Rising has confused you, then the brains behind the beauty, Alex Hines, has done her job, but it's not easy to create some very twisted and often dark sketches and comedy. "Usually my brain spits these fucked little ideas out at me and if it makes me laugh I’ll do it, even if literally everyone else says no," she explains. "With Wilde Night In and Juniper Rising I’ve been so lucky to have my collaborator and director Sarah Stafford by my side. I’ll go to her with the dumbest ideas and we’ll riff and she’ll shape until it’s a show. Before Sarah it was far more chaotic and unhinged, but she’s got this magical way of helping imagination come to life on stage."

Understanding who Juniper Wilde is will never be a clear answer as Juniper is whoever she needs to be at any given time, and it's a persona that Hines keeps returning to more and more. "Juniper is the High Priestess of Pop, an icon, a witch and a slacktivist. A Frankenstein of celebrity culture, the zeitgeist and everything you’d hope your daughter never becomes," Hines says. "I keep coming back to her because she’s such a fun way to approach satire, and she gets away with a lot more than I ever could. Juniper shows are so creative and camp, anything can happen and I love that. She is an entirely other being. She always come from a place of needing love though, maybe we share a fatal flaw, but truly, I can’t be unpacking that because my mental health care plan has run out."

Despite the outrageous elements in Juniper Rising, Hines' work exists beyond just pure entertainment. When you consider that her previous outing as Juniper in Wilde Night In earned her an award for Best Feminist Work and a Best Festival Show nomination at last year's Melbourne Fringe Festival, the work speaks for itself. "I only make something if I feel like I have an idea I care about, but it has to be entertaining. If I’m not having a good time it’s not going to happen because I’m not making enough money to be stressed and miserable!" she tells me. "I think some people will think it’s just entertaining cause it’s so weird, but all my shows come from a fracture I’m interested in. Juniper Rising, though playfully dumb at times, is a critic on losing yourself. I’m fascinated by TikTok fame and the toll that validation seeking takes on mental health.  Juniper is an extreme case of main character energy gone wrong. It’s basically all metaphor but who knows what people will take that from the show."

"Juniper is a dark show. There’s supernatural elements, some bangas, some problematic things are said in a way that’s healthy for an echo chamber to digest and I think it’s going to be an incredibly entertaining show that will hopefully make everyone want to buy merch. Juniper Rising is the most ambitious show I’ve ever made, and it’s taking an incredible effort to get it up, but I think it will be worth it."

While playing such a character would be physically and mentally draining, Hines has decided to perform a second show during the Fringe Festival, this one being an encore season of her Melbourne International Comedy Festival award winning show, To Schapelle and Back (click here for our review). That's 16 performances in 18 nights. "I WISH I KNEW WHY, WTF IS WRONG WITH ME?!?! I mean I’m doing it because the first To Schapelle and Back season got cancelled because of covid and the return season was quite short. After winning the Golden Gibbo I wanted to give the show one more run in Melbourne to feel like I’d really done it. Then I got struck with this weird Juniper Rising idea and she was in for a penny in for the pound as they say," Hines laughs.

1) If you had to name your child after a vegetable what would it be?
Mmmm not carrot cause they’d get bullied and probably get called rot rot, the rotten so maybe I’d call them Pumpkin…that’s cute as shit actually. “Come on pumpkin, get your shin pads it’s time for soccer practice”.
2) Which reality TV show would you most like to appear/compete on?
Real Housewives of Beverly Hills, I’d love to kick it with those gals plus it means I’m rich as hell and made it in LA.
3) How many seconds can pass before you can't eat food off the floor?
Depends on the food, the floor and who’s watching. If it’s a clean floor and something yummy….bitch I’ll eat it.
4) What's a song that sums up your life?
At the moment I’m really feeling like my life is the opening credits of Round the Twist.
5) It just isn't a Fringe Festival experience without ... those weird red stress bumps popping up on my scalp.

To Schapelle and Back Show Details