To Schapelle and Back review (Melbourne International Comedy Festival) 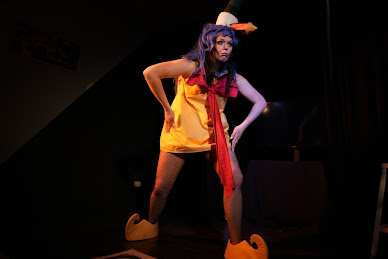 Alex Hines is having a pretty crappy birthday. Her dad is missing and Blockbuster is closed. What's a private schoolgirl on a swimming scholarship meant to do? Well not much, because the ancient doppelgänger curse is about to strike and Alex's life is about to become inextricably linked to that of Aussie icon, Schapelle Corby. Alex will need to go To Schapelle and Back in order to see the light on the other side in this incredibly twisted and outlandish Melbourne International Comedy Festival offering.

While having some background knowledge about who Schapelle is would help with some of the show's subtle (and overt) humour and observations, its look at Australian culture and sense of identity is broad enough for everyone's entertainment. This isn't a show exclusively about Schapelle Corby. Hines' ability to take pop culture references, such as Mr. Squiggle, Big Brother and Chris Crocker, and mould them into something that can slide seamlessly into the Corbyverse is very impressive and reinforces the confidence that Hines has as a performer.

It can be a genuine mind fuck at times trying to figure out when Schapelle is on stage or when it's Alex, which draws you in even more to the unhinged nightmarish existential crisis that is being played out. There are instances where it seems like Hines is about to lose control of the story for the sake of some laughs but she cleverly pulls it back in and you see the pieces all come together. There's a few lines here and there that could be cut to keep increasing the momentum and in turn, heightening the wildness of her journey, but this is a minor quibble in a rather extraordinary show.

Musical numbers also flow throughout To Schapelle and Back, including an absolute corker of a cover to Chicago's "Cell Block Tango". The closing song is unreservedly fitting and executed perfectly in bringing this adventure to a worthy and satisfying ending.

It is no fluke that Hines won Best Work by an Emerging Artist at the Melbourne Fringe Festival last year. There is so much going on inside her head and it is testament to her skill as a theatre maker to know when to push the boundary and when to rein it back in. To Schapelle and Back is one hilarious surprise after another as you're thrust into this crazy and chaotic Corbyverse that Hines had made for us.