The tribe has improvised in Completely Improvised Survivor 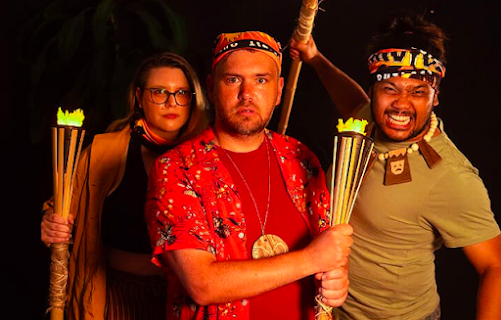 31 May 2000. It was the day the reality TV world landscape changed forever with the premiere of Survivor, where a group of strangers battle it out as tribes and as individuals to outwit, outplay and outlast everyone else and become the sole survivor and winner of a million dollars.

Fast-forward 22 years and there's a new player in town with Completely Improvised Survivor. Created by Melissa McGlensey and Douglas Wilson, each night audiences are witnesses to a tribal council with flashbacks to events that have happened between the players. As the title states, this is all improvised and made up on the spot so the audience and the cast are never quite sure what they are going to get.

"Each show is the finale "episode" of a fictional season of Survivor. The players mould their characters on the spot based on audience suggestions and then perform a "previously on" montage, which fills in the backstory for the full season. Then they go on and play out the remaining immunity challenge, tribal council, etc, all while building on top of the backstory they just invented," McGlensey explains.

"Doug and I spent a lot of time discussing this idea and deciding what the format might look like. It was important to us that rather than a durational version, which seemed like the easiest translation of the show, that we offered something that gave the improvisers a bit more freedom. The format we landed on allows them to populate the action of the entire season themselves. The cast also deserves a lot of credit for this as we did a fair bit of trial and error during rehearsals before our first season and it really only works because the performers are so freaking talented and such big Survivor nerds."

While the cast has a mix of hardcore fans and complete newbies to the show, everyone had to go through a Survivor boot camp to prepare. "Most players were already big fans of the show, but for the ones who hadn't watched as much of it, there was required viewing seasons. Even if every player hasn't seen every single season like we have, we try and have them all watch the same few so that we can dissect them and have this common language. I'd say that the most popular seasons for our cast are USA seasons 7, 13 and 37. We've also had them watch the last few recent seasons so that they can get a feel for how the game has changed."

But a knowledge of Survivor isn't the only thing the cast needed for Completely Improvised Survivor. Giving their fellow cast mates and the audience a good time is critical to good improv. "I think quality improv captivates the players and the audience. If players aren't surprising and delighting one another then nobody, especially the audience, is having as much fun as they should be," McGlensey tells me. "I know our show does this well because we've built it into the format. Players are also not just performing in the show, they're competing at well, which leads to a new level of focus because they don't know who will find the immunity idol, win the challenge, get voted out or be crowned sole survivor."

"They often don't know what other things I might throw at them either. For example, last season we included some fake idols in the mix just to keep them on their toes. I haven't ruled out having advantages, surprise double eliminations, new challenges and more. It's important to us that while they're actors and improvisers playing a character, they are also in a competition and trying to win. For me, that keeps things interesting. I want to keep them, and the audience, on the edge of their seat the entire time."

With a number of Survivor Australia alumni and producers having attended the show and chatted with McGlensey, the comedian believes she stands a good chance of going far into the game. "I wouldn't do so well in the physical challenges but I would have a strong social game. I would struggle with the lack of sleep though. I think ultimately I would get voted off for being too hangry. I'd like to think I would at least make it to merge though."

Despite Survivor being one of the greatest shows on Earth, it is fair to assume that not everyone would agree, and perhaps their dislike or ambivalence of the TV competition game could deter them from giving this show a chance during the Melbourne Fringe Festival. But just like a Survivor player at final tribal council, McGlensey is ready with a rebuttal. "If you're a fan of laughter, pop culture and comedy, then this show is still for you. There is an extra layer of enjoyment for Survivor fans who come see the show, but at the end of the day it's a delightful good time for anyone. It's just a bunch of comedians doing what they do best, with a little extra strategic twist thrown in there."

1) If you had to name your child after a vegetable what would it be?
Celery- I think it's a strangely beautiful word.
2) Which reality TV show would you most like to appear/compete on?
My answer may surprise you! Though I love watching Survivor, I don't want to play it. It looks borderline traumatic. The show I do want to go on, however, is the Belgian version of The Mole, De Mol. Unlike Survivor, it's got some collective elements which makes it a bit more fun and a bit less back stab-y. Also, you don't have to starve and be freezing cold and get attacked by bugs!
3) How many seconds can pass before you can't eat food off the floor?
Depends on the food and the amount of pet hair on the ground. Dry food? As many seconds as you want. Wet food? It was lost to me before it even hit the ground.
4) What's a song that sums up your life?
California by Joni Mitchell
5) It just isn't a Fringe Festival experience without... taking a risk and seeing something weird, new, interesting and/or improvised :)