30 Days of Vegetarian: Day 3 - To The Supermarket! 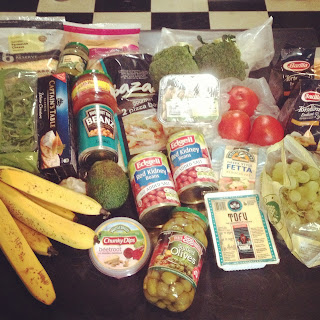 Finally had some time to get to a supermarket and get some food for real diners. A few people told me that once you stop buying meat products you also start saving money - well this grocery shop was just as expensive as my usual one, so not sure if I have done something wrong here? All that you can see on the left cost me $56.75 - and it's not like these things are staples as I am going to have to buy them all again next week!

I did some more research and maybe I was just ignorant or perhaps it's a common misconception but it turns out proper vegetarianism also includes no dairy or eggs. I already don't eat dairy so that's not an issue but interesting that even vegetarian websites seem to include cheese in their recipes.

Dinner tonight was black bean quesadillas. Was quite looking forward to having these as I know how filling and delicious they can be. However, my lack of culinary skills was soon evident when I stared down at all my ingredients and was utterly confused as to what/how I should be preparing it all (it's been a while since I cooked anything). Anyway, the picture below shows the website's image and my results. I'm pretty sure you can tell which is which though. 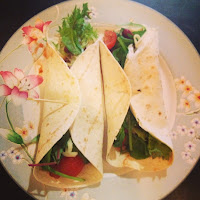 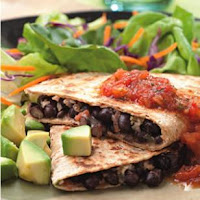 I couldn't find black beans at the supermarket and with time against me I settled for red kidney beans - which I suspect would give the same result. And no shells, so settled for tortillas. So in fact, I think I ended up having red bean tortillas instead of black bean quesadillas! Was still good though as I hoovered it down!

I found this brilliant documentary through a twitter friend today called Meatwork. In it, the filmmaker - a meat-eater herself - goes to work at an abattoir for five weeks to discuss wether she would eat meat if she had to kill the animal herself. It's graphic but it's not, and I certainly don't know if I could have done it. Which begs the question, if it upset me just by "watching it" then how can I justify eating it? Food for though quite literally...