So in the last 12 days I have been doing a lot of reading and research into vegetarianism and checking out the vegetarian communities. On a whole, it has been good and interesting but there is that small group of people who believe that being a vegetarian makes them better than other people and the holier than thou attitude does not sit well with me.


For example, there was a photo of a North Melbourne football player eating a kangaroo burger as part of a Grill'd campaign. One vegetarian decided to get rid of all her North Melbourne FC memorabilia (with "Kangaroo Killer" scrawled all over it) and throw it in the bin, then take a photo of it and vent her disgust. Yes everyone is entitled to their opinions but don't start preaching your cause, especially to those who are converted or borderline converted. It's a sure fire way to make people turn the other way.

For dinner today I went to Madame K's Vegetarian on Brunswick St in Fitzroy and it was by far the best vegetarian place I have been to. Went along with a friend who has been vegan for a number of year and we chatted about a few animal rights issues and stuff. She has also referred me to Fry's Vegetarian non-meat meat products like....popcorn chicken!!!! My one weakness has been battled and won. Although I have to try it first but she said her husband loves it so I have high hopes! 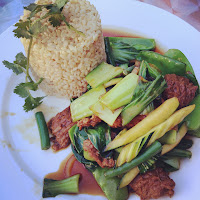 But anyway, going back to Madame K's; taking all things into consideration, including price, variety, ambience and quality of food it was amazing. I had the Vegetarian Oyster Sauce, which was stir-fried mushroom made lamb with snow peas, onions, shallots and bean served with brown rice. It was absolutely to die for and so filling. I sadly didn't have room in my 'pudding stomach' to try the Banana Roti with berry sauce and ice-cream :( But next time for sure.
Posted by Myron My at 11:48