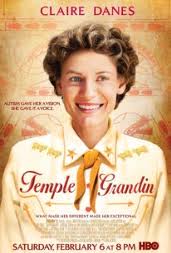 Going on a friend's recommendation, I watched Temple Grandin (movie) last night. Temple Grandin is a doctor of animal science at Colorado State University. She also has autism (when Dustin Hoffman was researching his role in Rainman, Temple is who he spoke with). In a time when autism was still 'the great unknown' Temple was able to use the anxieties of feeling threatened by her everyday surroundings to create better welfare for animals.

She believed that the worst thing you can do to an animal is to make it feel afraid and how animals use their emotions, including how they use them to predict the future. She used all the above to introduce designs for sweeping, curved corrals which intended to reduce stress in animals being led to slaughter. 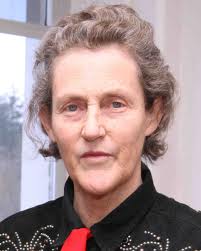 Temple has received some criticism about her work, especially as the animals are still killed for their meat. But let's be honest, brutally honest; these animals will be killed. As much as people would like it, I do not believe we will ever reach a time when everyone stops eating meat or stops wearing leather. But to be able to help lower the anxieties these animals have and attempt at giving them a better "life" is the next best thing. And no one seems to have done more to help this cause than Temple.

If anyone is interested more about this inspiring woman and the work she has done on livestock behaviour, design of facilities and human slaughter of animals, click here.
Posted by Myron My at 12:05