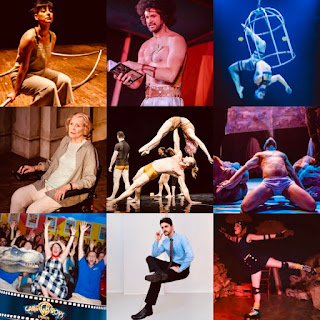 Every year I tell myself no more saying yes to going to all the shows in Melbourne, and this year I managed to cut down from 221 in 2018 to only 199 in 2019, and yes, those numbers do annoy me. I found this year particularly exciting as I saw some amazing work from new and emerging writers and performers who I can never get enough of seeing on stage. I witnessed shows in venues that hold hundreds of people and others that were intimate one-on-one experiences.
As an audience member, I got to plan a friend's wedding in a cafe, discover hidden secrets in Werribee, explore loneliness and isolation in a caravan, watch a five hour break-up take place on stage and suckle on some of mummy's breast milk.
Like most people, I like to keep track of everything I see so I maintained a list of them all. Below I list the top ten shows I saw in 2019. If I reviewed it, then a link to the original review is provided.

This is also a great reminder that sometimes the most memorable and exciting experiences are not always the big budget, flashy ones but the ones that are only on for four nights at a small theatre venue. Especially in this current arts climate, remember to support your independent theatre makers and venues - some can cost you as little as $20 and can be one of the most original, inspiring and though provoking performances you might see.

For the second year in a row, a circus show has taken out the top spot with 2019 going to Circa’s Humans. This entrancing show investigated what makes us human through superhuman circus acts and acrobatics that even when seen could still not be believed. One breathtaking moment involved five performers simultaneously jumping and tumbling through each other with precision timing in order to get their heights, movements and speeds in perfect unison to avoid any collisions. Even when the pace slowed down (no doubt so we could all catch our breath), the skill and talent remained clear as shown in the leap frog-esque game that was played by the ensemble.
It is extraordinary the way Circa presented a moving and insightful examination of what it means to be human with their bodies and movement and depicting happiness, sadness, fear and resilience with authenticity and depth, and much credit should also go to director Yaron Lifschitz. Humans was truly an unforgettable experience.


American movie legend, Ellen Burstyn was utterly captivating as Katherine Brandt in Moisés Kaufman's 33 Variations. Burstyn played a musicologist who had devoted years of her life trying to understand why German composer Beethoven was so consumed with writing 33 variations to Anton Diabelli's simple waltz.
Director Gary Abrahams demonstrated an immense skill in bringing stories and characters to vivid life and ensured we got masterful results from his cast including the inimitable Lisa McCune, the stunning Helen Morse and the flawless Andre de Vanny.
Dann Barber's set design was full of delightful surprises with its spiral staircase and arched doorways that the characters flowed in and out of, perfectly suiting the two time periods. The live music on stage by pianist Andrea Katz emphasised the emotional trajectory of the narrative and allowed the audience to familiarise themselves with the specific variation being discussed and its relevance.
33 Variations was a compelling production by Cameron Lukey with an incredible team both on and off the stage.


3. World Problems - review
What I loved about World Problems is the simplicity in which it tackled complex issues around our future and the state of our planet. The stage was littered with various metal pieces that writer and actor Emma Mary Hall slowly began to put together. As she did, she remembered memories of the past, the present and the future, such as George Clooney's death.
Rachel Lee's lighting design built up to an inspired climax, wholly supporting Hall's subtly mesmerising performance, words and intention.
In World Problems, Hall provided an opportunity for the audience to deeply consider how their actions are impacting on the world. She asked us to reflect on other lives on this planet and to even look beyond human life, because World Problems wasn't a show for only humans. It was a show for every living thing to come together and figure out a way on keeping us and our environment alive.

My top pick at this year's Melbourne Fringe Festival, Mime Consultant was a show where you thought you knew what you were getting yourself into but ended up with something completely unexpected and far better than anything you could have imagined.
Adding mime to his repertoire of comedian, magician and bisexual, Patrick Collins delivered an unforgettable hour of non-stop laughter as he helped people achieve their mime dreams.
The dissection of his material from all angles guaranteed that no joke was left unturned, resulting in a constant source of entertainment. Collins has taken this traditionally silent art form and turned it (and comedy) into a truly unique experiences for audiences.

* Tickets to Collins' new show for the 2020 Melbourne International Comedy Festival, Mime Sheriff at The Butterfly Club are now on sale.

Game Boys Cinematic Universe was a comedic pastiche to theme parks of the 90s, particularly those with a focus on film and the cinematic experience, hello Movie World. We were welcomed by our hosts, brothers Eden and Josh Porter (Game Boys) and before we knew it, we were strapped in for our Backlot Tour of Game Boys Studios.
The attention to detail in what a theme park should look and feel like and the dedication the two performers had in their characters allowed the audience to be swept away by the entire adventure. Outstanding use of AV technology ensured the exaggerated scenarios they took us through, such as the sound studios where Hans Zimmer is hard at work and their one-of-a-kind Jurassic Park ride, strengthened the world being presented to us.
This was a masterstroke in comedy with plenty of laughs while making some interesting comments on the film industry.

The last in a trilogy of confessional works by dancer/performer Joel Bray, Daddy explored his relationship with his father and his culture as well as opening up about being a gay man and his use of sex to fill an emptiness inside himself.
Bray brought to the surface the relationships, the history and the heritage he has lost due to colonisation. The fluffy pink set pieces and props (sugar and sweets) were a stark contrast to the gravity of his words, serving as a link between his childhood and adulthood and his culture and identity.
Eroticism permeated throughout Daddy that was superbly supported by Katie Sfetkidis’ lighting, delivering some of her finest work. From her playful pink hues to exposing Bray’s later outrage, her sublime design was meticulous.
Daddy may have painted a somber picture of someone using every possible sugar high to fill the gap in his heart, and while the show culminated in the ultimate high, this one felt different to the previous attempts we were informed of. This one was joyful, loving and hopeful.

*Tickets to Daddy's return season during the Midsumma Festival are now on sale.

Melbourne performer Andi Snelling, had an active life with numerous acting projects constantly on the go until she was bitten by a tick in 2014. Happy-Go-Wrong was a comical yet candid look at her subsequent diagnosis of Lyme disease and what it's been like battling a chronic invisible illness.
Snelling found a marvellous balance of humour and sadness in her writing and acting that allowed the audience to comprehend the seriousness of her illness but didn't leave them wallowing in misery.
Music was integral to the show and the songs selected supported the scenes rather than controlling them. Her mime of eating a banana as Singin’ in the Rain’s “Make ‘Em Laugh” plays, highlighted that sometimes you don’t want to put on a performance because sometimes you don’t want to laugh. Happy-Go-Wrong drew the audience into the reality of living with a chronic illness and when Snelling sung her original song, “You Are Alive”, we were motionless, transfixed by a moment of pure emotion and truth.

It goes without saying that a night out watching the Briefs boys is going to be a hugely entertaining one. In Close Encounters, the troupe of sexy and energetic performers, led by their divine captain Shivannah (Fez Fa’anana), have come from the future to assure us that the human race is surviving and everything – and everyone - we are fighting for right now will be worth it.
What followed was a variety of cabaret, burlesque, circus and dance that drew awareness to the importance of using our voices to help each other, especially those who don’t have a voice, and to celebrate and love all who are around us.
The paired routine of aerialist Thomas Worrell swinging in a human birdcage and Shivannah was breath-taking in its execution and a powerful instance in expressing the humanity inside us. Paul Lim's lighting design, Dallas Dellaforce's spectacular costuming and a thumping soundtrack ensured that the performers of Brief are given the best opportunity to show us their skills and their goods.

For anyone wanting to learn how to act then Garry Starr Conquers Troy was the show for you. If you never want to act, Garry Starr Conquers Troy was still the show for you.
Brimming with literary and film callbacks, Damien Warren-Smith's impressive word play and puns, and his skill in combining two opposing references of pop culture, mythology or history (Mr. Ed and the Trojan War) were the perfect complement to the physical comedy and clowning that was present. He was clearly comfortable with being Garry almost to the point that it felt like an extension of himself, and his improvisation with the audience when reactions were not what he expected was evident of this.
If you ever wanted to do good acting or simply curious to see what good acting entails, then this is a masterclass you should probably avoid. However, if you are after side-splitting comedy with brilliant character work, then Garry Starr Conquers Troy is the show you didn't want to miss.

Three time Barry Award nominee Anne Edmonds' Melbourne Comedy Festival show, What's Wrong With You? looked at the people and moments that enter our lives for the sole purpose of breaking us down.
There were a range of subjects covered that set Edmonds off, including those who carry plastic bags to put their belongings in instead of backpacks, Pauline Hanson, ukulele players and the Catholic Church. Clearly some were more justified than others, but all were just as triggering, for her and us.
Edmonds is a great storyteller and she knew precisely how much information to give to keep us wondering what happened next. She has the ability to have us believe she had ended a story but then went back to it later with further outrageous developments to a conclusion we never saw coming. You do you Anne, you do you.

And just because rules were made to be broken, here are the shows that were pipped at the post: