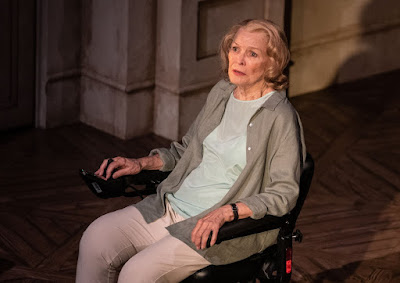 It's a mystery how a song or piece of music can elicit strong emotions from a person. We may listen to heavy metal when we need a release whereas for moments of clarity we might seek some classical music, such as Beethoven. In many ways, the music we listen to often becomes the soundtrack of our lives and this is touchingly explored in Moisés Kaufman's 33 Variations, in which a musicologist devotes years of her life trying to understand why German composer Beethoven was so consumed with writing 33 variations to Anton Diabelli's simple waltz.

American film legend, Ellen Burstyn is utterly captivating as musicologist Katherine Brandt. Her ability to show her gradual loss of control of her body due to her diagnosis of amyotrophic lateral sclerosis (ALS) while desperately clinging to her intellect is masterful. Her troubled relationship with her daughter Clara, played by the inimitable Lisa McCune, is examined without melodrama and reaches a genuinely affecting conclusion with acceptance of mistakes from both sides.

Toby Truslove radiates warmth as Mike Clark, Katherine's nurse, Clara's love interest and the unwitting mediator between the two as he tries to keep the calm, particularly over Katherine's decision on how she chooses to spend her final months. Helen Morse is stunning as Gertrude Ladenburger, Katherine's academic contact in Germany who eventually becomes her confidante, and always willing to speak her mind.

As Katherine's story begins to unfold, Kaufman introduces a second story that runs parallel to this, where we see the process of how Beethoven came to write the 33 variations in 1819. William McInnes brilliantly captures the eccentricity and obsession Beethoven had with perfection while contending with his impending deafness. Andre de Vanny is flawless as Anton Schindler, the long suffering but extremely loyal friend of Beethoven whose reliability as a biographer for Beethoven has remained in doubt for many years. Francis Greenslade displays great comedy relief as the exasperated Anton Diabelli.

Pianist Andrea Katz sits at a piano onstage, playing many of the 33 Variations, at times to emphasise the emotional trajectory of the production and at other times, to familiarise the audience with a specific variation that is being discussed and its relevance.

Director Gary Abrahams once again demonstrates his immense skill in bringing stories and characters to vivid life. Every movement that is made on stage is made with purpose and the interaction between the characters of each period is effective in uniting the two stories, as if they are dependent on each other to continue living. Similarly, scenes where both stories occur at the same time, with each unaware of the other's presence and even speaking the same lines, are thoughtfully presented. 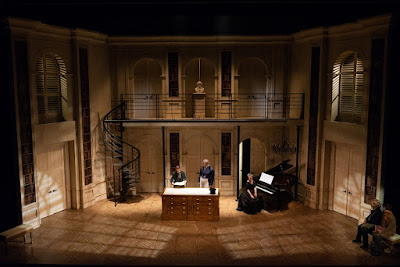 Dann Barber's set design is full of delightful surprises and with its spiral staircase and arched doorways that the characters flow in and out of, perfectly suits both time periods. Through this design, the connection between Katherine and Beethoven remains a constant and their scenes together allows them to be a comfort to each other. Visual projections reveal Beethoven's conversation books and journals, along with his scribbles, notes and soup-stained sketches. It's an interesting reminder of how history is retained through modern technology and once more links Katherine and Beethoven closer together.

Even for those who know little of Beethoven, 33 Variations is an absorbing story that is accessible to all. While it is incredible (and a rare opportunity) to see Burstyn live on stage, this production is also an opportunity to appreciate how fortunate we are to not only have such amazing local acting talent but also the talent behind the scenes that make it all possible. With its exploration of love, connection and passion, 33 Variations is a moving experience on how to let go, and it is destined to be a theatre highlight of the year.

Image credits: Lachlan Woods
Posted by Myron My at 09:37