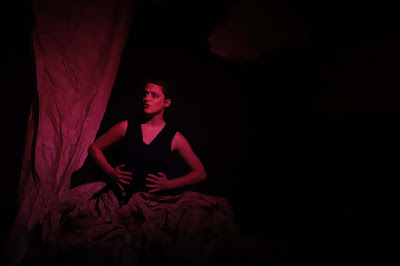 The sparkle in Andi Snelling’s eyes is evident throughout Happy-Go-Wrong and I’m not referring to the glitter she is wearing. Snelling was born to be on the stage, so it’s disheartening that chronic illness has kept her from doing this for a number of years. However, this is all changing with her new show that has her opening up about how it feels to not be able to do the thing you love and what it has taught her about life.

In Happy-Go-Wrong, a French angel (because why not?) named Lucky has come from Cloud Nine to seek out Snelling and offer her some guidance and perspective. These scenes are interspersed with Snelling's skilful use of spoken word, physical theatre, clowning, and music to express how being diagnosed with a chronic illness has impacted her. Snelling finds a marvellous balance between humour and sadness that allows the audience to comprehend the seriousness of her illness but not to leave them all wallowing in misery.

The minimalist set design is a great example of how a little can go a long way. Sheets of crumpled brown butcher paper litter the floor and while it is initially unclear what it represents, the well-timed reveal creates a strong visual reflection on what Snelling has been enduring. The subtle strobe lighting by Jason Crick and the sounds of the paper - reminiscent of rough waves crashing in the ocean - add an intense urgency and helplessness to the scene.

Music is integral to the show and the songs selected support the scenes rather than controlling them. During her mime of eating a banana, Singin’ in the Rain’s “Make ‘Em Laugh” plays, highlighting that sometimes you don’t want to put on a performance because sometimes you don’t want to laugh. Happy-Go-Wrong draws the audience into the reality of living with a chronic illness and when Snelling sings her original song, “You Are Alive”, we are all motionless, transfixed by a moment of pure emotion and truth.

This is the third collaboration between Snelling and director Danielle Cresp and the two make a formidable pair. Various topics surrounding chronic illness are explored, from the barrage of unsolicited health advice to fighting to stay alive and to simply coping with the daily demands of an invisible illness, and Cresp ensures that these are all given equal time and space in a focused and considered manner. The only misstep are the phone recordings that play during the blackouts as a transition to the next scene that don't quite suit the tone of the performance and take us out Snelling's world.

Performed as part of La Mama Theatre's Explorations season of presenting works in different stages of development, this is a strong return from Snelling. Happy-Go-Wrong is a powerfully personal story that doesn’t get weighed down by sentimentality and becomes all the more affecting because of it. Snelling’s talent on stage has been sorely missed and we can only hope that this work continues to breathe and grow.

Image Credit: Sarah Clarke
Posted by Myron My at 08:48