The Shadow Whose Prey the Hunter Becomes review 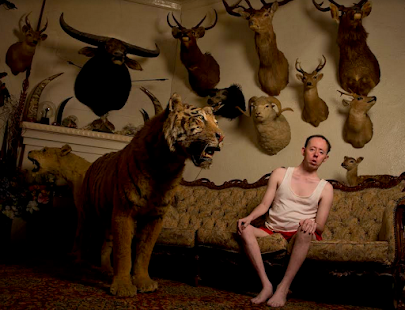 Originally staged in 2019, Back to Back Theatre's The Shadow Whose Prey the Hunter Becomes returned for a two night season in which we witness a group of people with disabilities setting up for a public meeting in a town hall. While we are not quite sure what the meeting is about, it eventually shines a light on all of us with regards to the society we want to be part of.

With over 15 years of experience with Back to Back and having co-authored the work, Sarah Mainwaring and Scott Price are joined on stage by fellow performer Chris Hansen. The three share a natural and organic energy flowing between them. Their engagement with the audience constantly changes from humorous and light-hearted to authoritative and knowing, making it difficult to prepare ourselves for what's to come and generating an air of uncertainty for everyone present.

This is amplified by Andrew Livingston's lighting design, which at times includes having the entire theatre lit up where the audience can be seen by the performers and raising the question of who is performing for who? Can we simply ignore the issues being discussed when we are being watched? Lachlan Carrick's sound design moves between relaxing lounge music to settle into your chair with and palpitating beats to convey a sense of urgency, giving the audience the opportunity to really comprehend the gravity of the conversation we are hearing.

The trio cover a variety of topics, from Kevin Spacey's sexual assault charges to whether they identify as disabled to etiquette about when one should and shouldn't touch themselves. While this permits for numerous matters to be shared, it does not allow for anything to be fleshed out. The few times differing opinions or clashing thoughts occur, they are glazed over and quickly put aside. It would have been interesting to see what happens when we go deeper with some of these more pressing ideas.

As director, Bruce Gladwin's vision for The Shadow Whose Prey the Hunter Becomes gives the audience the opportunity to reflect critically on themselves without accusations or aggression. Beneath the bright lights of the theatre, we are asked to acknowledge the downfall of society and what we - as a collective - should be doing about it.

The Shadow Whose Prey the Hunter Becomes was performed at Monash University Performing Arts Centre on 19 and 20 May.