The 7th of February 2009 will always be known as The Black Saturday bushfires, where a series of fires burned across Victoria, resulting in over 2000 homes destroyed and 173 people dying. But in Fleur Murphy's new play Hearth, this also happens to be the 18th birthday of Tom Robinson. Before the fires hit though, there is plenty of drama to keep him and his parents busy, particularly with the arrival of his brother Matthew and his partner Abbey.

Murphy has crafted an intriguing story even with the familiar family arguments and secrets being unearthed. In this instance, flashback scenes and monologues to the audience are delivered so that we are cleverly drip-fed pieces of information surrounding the Robinson family. Murphy presents fleshed out characters who are not simply there to serve the story but rather to tell the story. Through the dialogue and interactions Murphy has them have with each other, these characters feel authentic and so it's almost effortless for the audience to become invested in their lives.

Tom Royce-Hampton's direction complements the intricacies of Murphy's script, ensuring how the characters engage with each other is as realistic as possible. Chantal Marks' domestic set design elicits a comforting sensation but also one of apprehension with strips of material hanging from the ceiling periodically being pulled down, hinting at the destruction that's coming. Clare Springett's lighting design and Royce-Hampton and Max Royce-Hampton's sound design heighten the presence of the fires with crackling effects and an intense red glare. 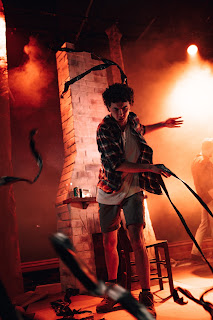 Geoff Paine gives an impressive performance as Kurt, Tom and Matthew's father, finding a considered balance between vulnerability and stoicism. His scenes with Carole Patullo are natural and organic in showing the love this husband and wife share. Patullo is a delight to watch as Barb, the doting and anxious mother who is apprehensive about the baby of the family moving to the big smoke for university.

Kurt Pimblett and Martin Blum as Tom and Matthew carry much of the emotional weight in Hearth and for the most part, they succeed in expressing the subtle and not-so-subtle thoughts and feelings they have towards each other and the disparate paths their lives are on. Their monologues are earnestly acted and offer great insight into their characters. Their conversations with their parents and Abbey reveal the history that exists without having to explicitly state it. While their individual performances are strong, when it comes to scenes with just the two of them, there are times when they seem to be working off different energy levels that cause those moments to play out somewhat stilted.

Sonya Suares is a highlight as the slightly fish out of water Abbey, Mathew's partner who is being introduced to the family for the first time. Suares displays an infectious positive energy that the other characters - due to their circumstances - are unable to. Louisa Mignone, called in to perform at the last minute due to unexpected circumstances, supports the cast well as a police officer with links to the family.

Set amidst the bushfires of 2009 Hearth is a compelling story of the strength and resilience we find in family and the sacrifices we make for the ones we love the most. This is a production that showcases what can be achieved when an inspired team of cast and crew come together with a clear shared vision.