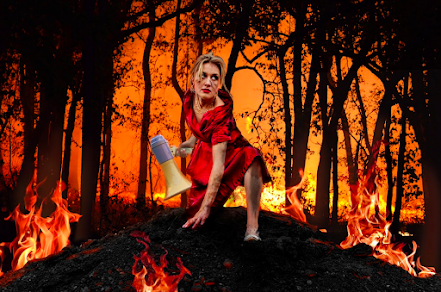 Back in 2016, I was given a copy of David Finnigan's play Kill Climate Deniers. In it, a group of armed eco-terrorists storm Parliament House and threaten to execute everyone inside including the Environment Minister unless the Prime Minister puts a stop to climate change. All this happens while Fleetwood Mac is set to perform in said building. Provocatively written with hilarious dialogue and challenging themes, it wasn't long until the play captured the attention of Australian far-right social and political commentator Andrew Bolt.

Bolt criticised the ACT Government for granting $19,000 towards the play due to its terrorist plot and "killing" of people. Former Australian politician Brendan Smyth argued that if you were to insert killing any other group into the title, it would be deemed offensive and jokes about killing any people should not be accepted. Media scrutiny intensified with the play making international news before it had even been staged. Fortunately, Finnigan persevered, later winning the Griffin Theatre Award in Sydney with a full-scale production presented in 2018.

Fast-forward four years, and Monash University Student Theatre (MUST) has taken up the challenge of staging Kill Climate Deniers for Melbourne audiences. It's a work that began in 2020 and we should all be grateful MUST persisted with getting this up and running. While the play takes a standard linear narrative form with the events at Parliament House, there are times when the fourth wall is broken and Finnigan, played by Ryan Hamilton, appears and speaks about the experience of writing this play, including the earlier mentioned controversies. In doing so, the frenzied world of the play blends with the actual world in which Finnigan wrote the play, where the anxieties and fears of the eco-terrorists begin to feel terrifyingly real, leading to serious contemplation about the precarious position the world is in.

Under the direction of Yvonne Virsik, the entire cast excel in their roles including Monique Marani as Environment Minister Gwen Malakin, Gemma Livingstone as Bekken, Gwen's press advisor and Felicity Barro as Catch, the leader of the terrorist group. Marani in particular puts on an incredible performance with brilliant comedic timing. Her line delivery and ability to capture the internal conflict of trying to do the right thing while being clouded by success and privilege is reminiscent of Sarah Kendall's nuanced portrayal of Sammy Cooper in Australian and British television comedy-drama series Frayed. Lucas Rindt's Fleetwood Mac has the audience in stitches and the contrast of playing "shock jock" Jalan Ones to Fleetwood Mac displays great diversity in his acting skills. Ensemble actor Shylie Arzouan brings all her characters to vivid life regardless of stage time, with her brief turn as a disgruntled politician being one of the evening's highlights.

A number of impressive visual and aural design elements heighten the story, including Jason Lehane's set piece of the Parliament House rooftop, Adele Cattenazzi's eye-catching terrorist costumes and Gwen's red dress-cum-combat outfit, and Savanna Wegman's inventive AV design. Given just how complex of a play Kill Climate Deniers is with its many ideas and fast paced urgency, Virsik ensures that these reinforce what the characters are saying, thinking and doing, without undue distraction. 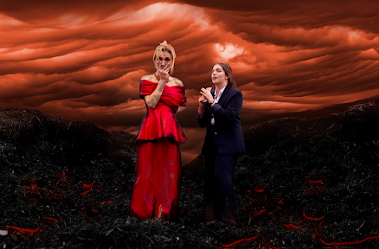 Even with exaggerated fight scenes (choreographed by Lehane and Georgia Kate Bell) and very amusing dance pieces (choreographed by Meg Heathcote), Kill Climate Deniers keeps its eyes firmly on the ball and brings political theatre to the stage without patronising its audience. It may be forceful in its opinions but it never forces its opinion onto us. It's the wake up call that we all need. It's also great supporting work that has pissed off people like Andrew Bolt.

There's so much more that can be said about Kill Climate Deniers but doing so ruins the numerous surprises you get from seeing the action unravel for yourself. MUST has presented a highly entertaining and thought provoking event that makes Kill Climate Deniers one of the best shows I have seen so far this year, and will undoubtedly be one of the best shows I see this year.