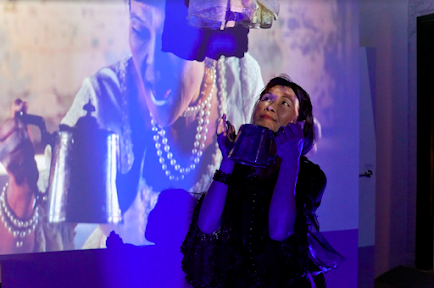 I've seen Yumi Umiumare perform numerous times over the years but always as part of the ensemble in someone else's show. Buried TeaBowl - Okuni is the first time I have attended one of her full solo works and I am very disappointed I waited so long to have had this incredible experience. Incorporating dance, spoken word, song and a tea ceremony, this performance installation is an intimate and stirring passage through time, ritual, the past and the present.

These four themes are clear in Umiumare's inspiration for her show: a 17th century Japanese dancer, Okuni, who is credited as being the founder of kabuki theatre. Literally translated to "the art of song and dance", Okuni began performing kabuki around Kyoto in the early 1600s and formed an all-female troupe that portrayed both male and female characters. Kabuki eventually became equated with prostitution and immorality and in 1629 this outrage led to a Government ban on women performing kabuki that was not lifted until the late 19th century.

Taking place inside an art gallery that promotes and displays local contemporary artists is the perfect setting for this performance, a space to complement the live art being created but also to be a contrast with the new work on its walls. Umiumare's inclusion of butoh, another form of Japanese dance which is focused on stillness and slow motion and often a play on the grotesque, and a tea ceremony, which thrived during Okuni's time.

Umiumare appears on the Black Cat Gallery floor to welcome us and then quickly changes out of her tracksuit pants and top and into a dress and slippers; this is the ritual of an artist getting ready to go on stage. A sense of longing permeates throughout the gallery as Umiumare, looking off into the distance, begins to move her body into various poses and positions around the space. We are immediately drawn into the world she is inviting us into. On occasion, outside noises or a person walking by on the street might cause distraction from the cocoon we are in but Umiumare warmly acknowledges it and retains the safe and comforting environment she has established.

As the show continues, we are led deeper into the gallery, where Umiumare seeks to connect with Okuni's spirit across dance, music and singing. She also shares a story of her father's passing and the importance that tea ceremony played in wanting to pay respect to him. We are gently encouraged to become active participants and join in the tea ceremony process, to sing, to move, and to release. 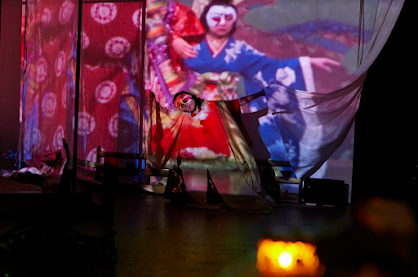 Takeshi Kondo's warped and ghostlike video recordings are screened on walls and hanging fabrics, further heightening this idea of trying to cling to memories of the past. Adding to the aesthetic allure are the many costume that are worn, from kimonos, hakamas and suikans to modern day wear, including funky jumpsuits, bright red-heeled boots and ostentatious jewellery.

Composer and sound designer Dan West presents an original and sublime score that is just as compelling as the visual elements of this performance. As Buried TeaBowl - Okuni commences, we are offered a contemplative and meditative soundscape that gradually transforms into an uneasy cacophony of what resembles a distortion of alarms and sirens going off. There is great skill shown in finding a consistent balance between the two so we can sit with and appreciate the feelings and sensations associated with these moods and tones.

Umiumare's homage to Okuni, the power of ritual and female strength is a captivating work. It is fitting that this performance takes place in a gallery as what we witness often feel like art coming to life. She may be attempting to awaken the spirit of Okuni in Buried TeaBowl - Okuni, but through her generous guidance, Umiumare helps free the spirit inside all of us and provide us with a profoundly moving awakening.