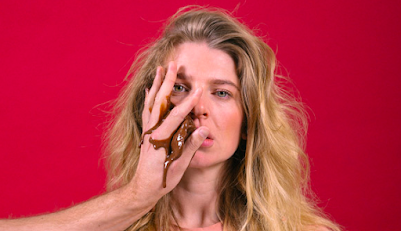 In Pieces of Shit, two complete strangers recall an individual memory that forces them to confront issues around morality, respect and their sense of importance. Phil (Bronte Charlotte) works in events, and occasionally plans weddings, because that's where the big bucks lie. She may hate it, but she's very good at it; she's like the Olivia Pope of wedding planners. She gets the job done. At one wedding, she meets a man whom she ends up dating for numerous years.

Dylan (Leigh Scully) on other hand has been unemployed for 18 months but has some money stashed away while he discovers himself playing video games. It also helps that he is living back home with his wealthy parents. Dylan's brother is the golden child of the family, so moving back home brings with it some anxieties. Through a series of shocking and tragic events, Phil and Dylan's lives become entwined as they deal with the fallout of toxic masculinity and processing their own trauma.

Charlotte and Scully do an exceptional job of taking these jarring and slightly unlikable characters and placing them in a sympathetic light. As Phil, Charlotte embraces her bristly temperament but is not afraid to show her vulnerability when it's required. Scully's mannerisms and body language as Dylan perfectly capture his naivety and links well with how his upbringing and relationships with his family has shaped his personality. With a minimal set design and props, director Nick Clark ensures the actors keep moving as they speak in a way that is specific to the character and as a visual representation of their emotional states.

The script is also penned by Charlotte and Scully, and they do a great job in telling these stories, some of which are inspired by their own real-life stories. As we start to put the pieces together, the tension heightens and the performances become fierier. The structure of this narrative with the two individual stories becomes a little wearisome, particularly once the link between them becomes clear, so it would have been interesting to see Phil and Dylan's paths cross at this point and engage with each other. Even without sharing any scenes, there is strong chemistry between the two and it's a shame we don't get to witness that. This would also assist with the closing moments, which feel abrupt and incomplete, as if there are still things left unsaid.

Pieces of Shit explores a topic that gets covered quite a lot in the performing arts and not without good reason, so it's encouraging to see the team behind this production taking a risk and being bold in how they structure it and the devices they use. In doing so, it takes us down a few unexpected paths that results in an energetic theatrical experience.