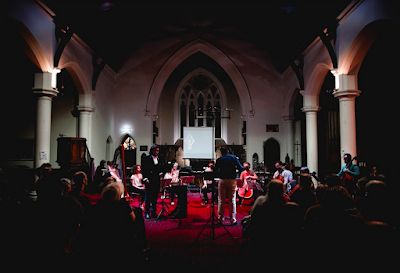 Founded in 2009, Forest Collective prides itself in presenting contemporary classical music to new audiences through innovative and distinctive performances. I am constantly amazed at how uniquely its productions are conceived and delivered. Its recent concert, Diapsalmata: P o r t r a i t o f a s e l f, is another flawless example of this, with two works highlighting mental health, identity, discovery and growth through the experience of a transgender person.

Kym Dillon has composed the music for both pieces, Sonata for Flute and Piano and Diapsalmata. In the former, Dillon accompanies flutist Brighid Mantelli in a composition of three movements. Linking emotions with nature and the environment, Dillon draws inspiration from three flowers found in the Surfcoast region of Victoria, to not only name the movements - (carpobrotus rossii ("Australian pig face"), eucopogon parviflorus ("coastal beard-heath") and leptospermum laevigatum ("coastal tea-tree") - but using the characteristics of the flowers to guide the music.

The first movement is performed as a fantasia, gently guiding the audience into this unknown world with caution and preparing us for the unexpected. The second is a playful arrangement, evoking a sense of exploration and curiosity. There is comfort and joy here, which builds towards the third and final movement where we are given the opportunity to reflect on what has been the outcome and grow. It may be a short piece but the emotional response that Sonata for Flute and Piano elicits puts us in the perfect state of mind for the main event.

For Diapsalmata, Dillon is joined on stage by 13 other musicians, a mix of core Forest Collective members and guest musicians, includes conductor Elliot Gyger. Dillon incorporates text and concepts from two books by Danish philosopher and the founder of existentialism Søren Kierkegaard, Either/Or and The Sickness Unto Death, to revisit her own self and identity during her teenage years when she was experiencing a dissonance between her mind and her body and eventually came to realise that she was transgender.

Dillon uses a chapter in Either/Or called Diaplasmata, a collection of aphorisms and anecdotes bathed in cynicism and despair, to inspire the music and tell her story. She does a brilliant job of personalising the work but not limiting it to be the only interpretation. We absolutely empathise with Dillon and the journey she has taken, but she allows us to connect with this on a deeper level and consider how moments of clarity and realisations in our own lives have impacted us. Guest musician and baritone Stephen Marsh has a commanding presence as he sings excerpts from The Sickness Unto Death that offers respite from the hopelessness of the Diaplasmata with insights and truths.

Diapsalmata: P o r t r a i t o f a s e l f is an outstanding double bill with a sonata and a song cycle that carries on speaking to you long after the talented musicians have cleared the stage. Dillon’s skill at bringing highly complex thoughts through classical music, opera and philosophy so seamlessly together is ingenious. Here's hoping for future collaborations with Forest Collective, a company that continues to stamp out its name as a leader in the arts with its dedication to opening people's minds about what contemporary music and performance can be. 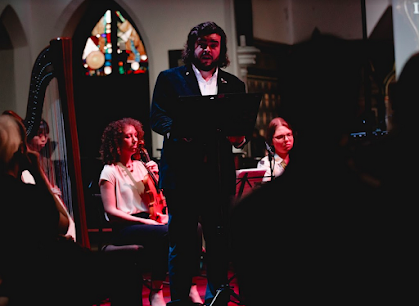