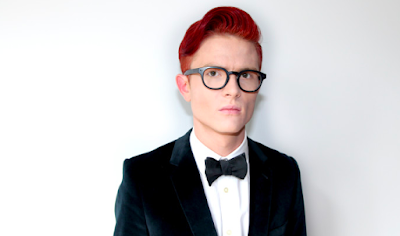 Already a seasoned regular at the Melbourne International Comedy Festival, Rhys Nicholson returns to the festival with new show, Seminal. While we can safely assume the show will be full of Nicholson's trademark wit and observations of the world around him, his show description gives nothing on the content or theme, simply requesting that you "please come to my show".

The word seminal however has two meanings that could indicate what path Nicholson's show will take. Seminal means "strongly influencing later developments" and also "relating to or denoting semen" - two very different paths. "Look let’s be honest, if you’re aware of my work, I think you know which one it is," Nicholson tells me. "I never know what to say to 'what can we expect?' Expect me to be on stage. Expect about 56 minutes of jokes. Don’t expect live animals. All the animals in the show are dead."

Considering Nicholson went into the lucrative career that is stand-up comedy because he has "absolutely no other skills", he has generated a substantial fan-base and was even nominated for the Barry Award in 2016 for the most outstanding show at the festival. In his near-decade of performing, there are still a few memorable audience reactions to his shows that he holds dear to his heart. "Last year during the Comedy Festival, David O’Doherty and a few hundred audience members sang Happy Birthday to me on my birthday," he recalls. "Also once, an elderly woman walked out of my show very slowly saying 'I think I’ve heard enough of what this boy is trying to do'. Happy times."

Despite not satisfying one elderly woman, Nicholson begins working on a new show far in advance in order to keep his audience laughing. Sometimes, formulating his ideas even a few weeks before opening night. "I start to work on the jokes and for about three months before the season I try and write but just procrastinate and eventually cram everything right in the last week. Then I work with my director Kyran to try and sort out what the show is," Nicholson tells me. "Then I perform it a bunch of times. I don’t get too nervous anymore but it depends on the show. I tend to just go a bit numb if I’m worried about it. Before a show I like to have one small drink like a whiskey or something. I also pee, like a lot. Like I’ll pee five times in 20 minutes. Then I finish the show and get to do it all over again and so I am gradually losing my mind."

1. My favourite board game is Monopoly because it’s an excuse to openly fight with friends and family.

2. Which movie would you like to see turned into a musical and why?
I reckon Death Becomes Her and The First Wives Club would make incredible musicals. Basically any Goldie Hawn vehicle.

3. Which one person would you love to come to your show and why?
I wouldn’t mind Malcolm Turnbull coming. Just so he can watch me explain the gravity of how stupid and irresponsible he was last year. Fun.

4. I will try to keep sane during MICF by occasionally saying “no I’m just going to go home after my show tonight”. It’ll never happen. But it’s nice to make a plan sometimes.

5. Why did the chicken cross the road?
There was a group of teen boys walking up the street and they made him nervous. He didn’t want to make anything of it but figured it was easier to just cross.