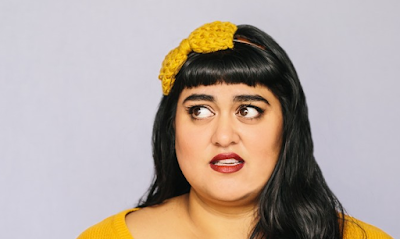 Everyone loves a good love story, which is exactly what Angella Dravid's show, Down the Rabbit Hole is based on. Dravid recalls a turbulent relationship she had beginning from when she was 16 years old and explores how love can make you go a little bit crazy and even end up in prison. Coming all the way from New Zealand, Dravid's show is bound to leave an impression on audiences during the Melbourne International Comedy Festival.

After reading a few glowing reviews for the show - which I urge you to not do and just go along for the ride - I ask Dravid if she can tell me what her show is about without giving too much away. Her summation is one that sounds absolutely intriguing: "I don't know how to summarise it. It's a love story gone awry? It's a story that gets more and more horrifying."

While most people would rather forget the terrible things that have happened to them and focus on the positives, Dravid went down the opposite path and though it would make a great premise for a show, and she wasn't wrong. "I don't remember a point where things became funny, I just know I became more and more detached from my feelings as life seemed to get worse," she recalls. "I became entertained by my own misfortune as a people watcher. I knew this part of my life would be interesting because most people's sad stories are enthralling. What I found to be my point of difference was feeling happier as things got worse, and my friends kept encouraging me to write something based on these events. However, I found the quickest, though not easiest, way of figuring out if things are entertaining, is to tell it on stage and watch how many people walk out."

Down the Rabbit Hole would no doubt be opening old wounds for Dravid and bringing back memories that have not only been shelved but are now being shared to roomfuls of strangers. So what makes someone go through this experience of creating this show? "Performing this show has been confronting and also cathartic. In the first week of doing it, I felt fragile," Dravid says. "Even now, after my most recent run, I find myself crumbling through certain parts in the show. That reluctance and hesitation is important for me though. I feel that as I continue through the story, I find myself loosening up and hopefully by the end the audience has come on a journey with me."

This journey won Dravid the Billy T Award, an award given to the outstanding emerging performer at the 2017 New Zealand International Comedy Festival. "Winning the Billy gave me immediate validation then after 20 minutes, crippling self-doubt that I'd just peaked. Most industry awards mean little to people outside the industry. I learned this the hard way," she tells me. "I've mainly used the Billy to try and persuade people outside the industry that I am of a certain standard. It's not enough to get me a bank loan but it's given me a certain amount of street cred."


1. My favourite board game is Scrabble because I feel like I'm using my brain and renovating at the same tile. I'm sorry.
2. Which movie would you like to see turned into a musical and why?
Saw.  Except I'd rename it 'Sang'. It sounds awful and something that would become a cult hit.

3. Which one person would you love to come to your show and why?
If I had a kid, I'd want them to watch the show while we're both the same age. I'm 31 now, so have my 31-year-old kid watch my show. I know that's impossible but so is this question. Hopefully it gives them insight into why I am the way I am. Hopefully it makes their childhood less traumatic because they'll have understanding. Hopefully they'll be great people and go on to become great parents.

4. I will try to keep sane during MICF by going for walks, eating healthy, drinking water.